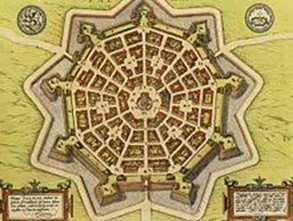 Popular among architects, philosophers, and artists of 16th century Europe was the idea of constructing a perfectly geometric city from scratch, in contrast to settlements with winding alleyways that grew organically over centuries. Drawings of such ideal cities were developed, such as Filarete’s 1465 plan for Sforzinda. However, no external geopolitical circumstance demanded that one be built. 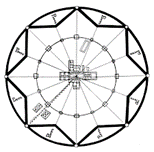 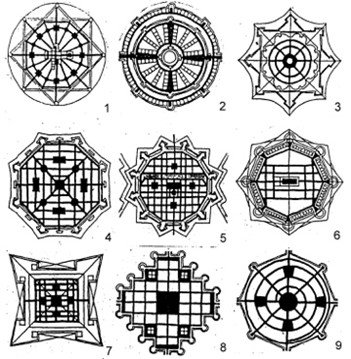 That was until 1593 when the Venetian Republic got fed up with Ottoman attacks and the ongoing menace from the Austrian Habsburgs. It was then that the Republic decided to build a fortress in the middle of the territory of Friuli. That decision led to the realization of the first Renaissance ideal city. Protective walls were constructed around the city patterned on a nine-pointed star. But the city-fortress didn’t come into existence in a year, nor a decade, nor in 200 years. The first set of walls, based on the 1593 plan by Vincenzo Scamozzi, were laid down in 1623, and several decades later another ring of angled walls was built. At the time, city was simply called just Palma. The Atlas Obscura website states that “…Palma was founded on October 7, 1593, the anniversary of the Venetian win over Ottoman forces in the Battle of Lepanto some 20 years earlier.” This battle occurred during the War of Cyprus when Christian forces supplied by the Italian states and the Spanish kingdom routed the Ottomans. At the start of the 19th century (1806 and 1813) during the Napoleonic rule, the third ring was built, and the city was renamed Palmanova. 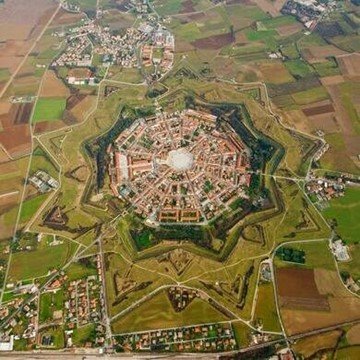 A hexagonal open space called the Piazza Grande forms the town center. Eighteen streets radiate from the center of the town in a pattern symmetrical (and asymmetrical, if one accounts for the impact of the gates on the street pattern) leading to the nine arrowhead bastions at the star’s perimeter. A moat surrounded the complex and three monumental gates (Porta Udine, Porta Cividale, and Porta Aquileia) created secure entries as illustrated in the drawing at the top of the page. Ramparts protrude between bastions of the star so those points could be defended each by the other.

Given the radial street pattern, it is surprising that almost all of the buildings’ corners are rectangular. The right angle reigned supreme. While the diagonal motif of the street layout may have influenced the shape of the town, it had not yet come to free the geometry of all the buildings from a rigid orthogonal format…despite the opportunities presented by the countless angular corner lots. This would almost certainly not be the case if such a similar city plan were created in the age of Diagonality in the 20th or 21st century.