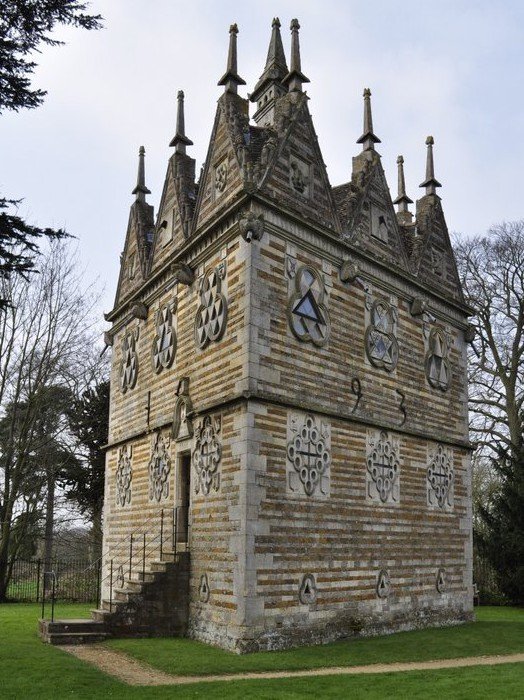 Sir Thomas Tresham (1545-1605) was a well-educated gentleman architect and builder in Northamptonshire, England during the Elizabethan era. In 1593 he designed and built, over a period of four years, a remarkable triangular lodge (then known as Warreners Lodge) on the edge of his estate in Rushton, a town in Northamptonshire, to manifest his fervent belief in the Holy Trinity and, as some believe, as a play on an abbreviation of his last name (Tres). The footprint of the building is an equilateral triangle.

The Triangular Lodge (known also as Rushton Lodge) is what is known as a folly, a building primarily constructed for decoration but suggesting through its appearance some other purpose. A folly can call attention to itself through unusual details or form. This lodge satisfies those criteria on all counts but also rises above them because it is a very early precedent for a subsequent stream of triangular buildings that followed in the next few centuries—and then exploded in frequency in the modern era.

The three-part manifestation of the Trinity is designed into every detail of the Lodge, even into the very unusual triangular floor plan of the building itself. Its three walls are each 33 feet long (note 33) and each has three windows, triangular in shape and surmounted by three gargoyles. The Tresham family had an emblem or crest in the form of a trefoil. The geometry of the trefoil is used repeatedly in the shape of the windows on what in the U.S. is called the second floor. The “basement” windows are much smaller but they, too, are trefoil in shape and have a triangle in their center. The shape of the first-floor windows is a rotated square. The triangular corners of the building on all three levels are separated by walls from the central space, which is hexagonal. One corner contains a spiral staircase, the other two are small rooms with currently unknown purpose. They have delightful windows that make them more appealing than one would imagine for a tight triangular space.

The famous architectural historian Nikolaus Pevsner considered the building so architecturally significant that he used a photograph of it for the front cover of the first edition (1961) of his The Buildings of England: Northamptonshire. His selection of this unusual triangular building for the cover of a treatise dealing with a country whose architecture was for centuries dominated by the right angle is perhaps best explained by the fact that in 1961, the diagonal motif was flourishing around the world. According to Joe Jarrett, a researcher in mathematics, Tresham owned a copy of Henry Billingsley’s 1570 edition of Euclid’s Elements. Jarrett writes, “That he chose to write such snatches of Stoic wisdom in a book of mathematics is surely no coincidence. As a devotee of architecture, Tresham attributed great significance to lines, angles, and numbers.”

Several other triangular buildings were designed and (most) constructed before the modern era. These include: