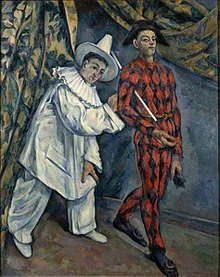 The French post-impressionist painter Paul Cézanne (1839-1906), regarded by many as the father of modern art, is generally not regarded as a Cubist. However, his early move away from representational subject matter surely cleared a path that he and others marched along toward cubistic works of art. It was a period of transition from an old-world artistic order to a modern order in which the use of the diagonal motif played an increasingly central role. The fact that Cézanne’s paintings, over time, became more and more diagonal in composition is not surprising; he often laid down his oils in parallel diagonal strokes. In his 1888 work called Mardi Gras, the subject matter, although recognizable as human forms in something of a staged setting, shows how important diagonality is becoming compositionally. Not only does the diamond appear in the harlequin’s costume but the triangle dominates as a subtext. The most salient feature is the white rod under the harlequin’s arm which carries a compositional line down from Pierrot’s conical hat, extending it through the outstretched hand of the harlequin. The hand is a fulcrum point where the imaginary line angles back and is picked up by the bent left leg. This then gets picked up in turn by the triangle of the harlequin’s legs and feet. This budding expression of diagonality is again revealed in Cézanne’s painting of a decade later, The Card Players. 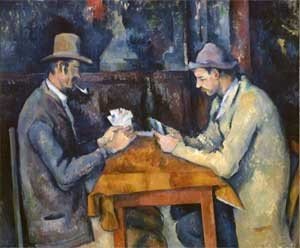 James Kettlewell—art historian, educator, and curator—wrote the following about one of Cézanne’s famous paintings, “Keeping with the diagonals, Cézanne, in the Card Players, also exploits the tension of these diagonals pulling against the verticals and horizontals of the frame. Tensions are what make paintings or designs exciting. In theory, he was not doing these kinds of adjustments consciously but, as he would say, he was simply following his sensations.” 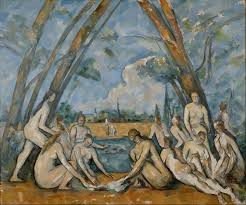 In Cézanne’s many versions of The Bathers, there is clear evidence on the artist’s deliberate intent upon presenting a rhythmic succession of triangular shapes into which the figures and leaning trees are ordered. The powerful and memorable pyramidal composition has both stability, gravitational massing, and a lively but crude array of human legs and outstretched arms that emphasize Cézanne’s fixation on the diagonal motif. Cézanne’s increasingly geometric and triangulated painting style influenced the work of Georges Braque, Henri Matisse, Pablo Picasso, Albert Gleizes, and Jean Metzinger, among many others.

Related Galleries: 3.6A - Painting | THE AGE OF PROGRESS