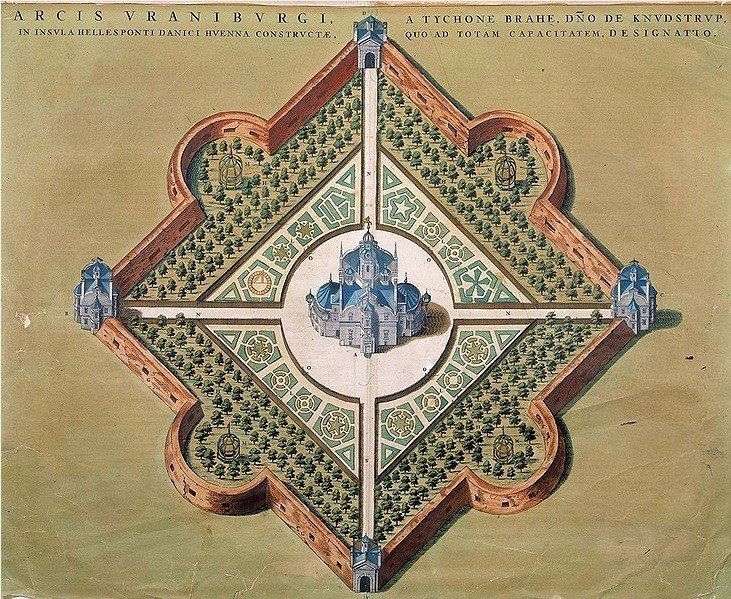 The great Danish naked-eye astronomer, nobleman, and writer Tycho Brahe was an adherent of the Copernican system of cosmic organization. He was known for his accurate astronomical and planetary observations. Based on his measurements, Johannes Kepler discovered the three laws of planetary motion that now bear his name.

To create a research institute for Brahe, King Frederick II granted him an estate on the island of Hven that was then under Danish control. Frederick also provided the funds to build a palace with research facilities called Uraniborg (named after Urania, the muse of astronomy). Construction started in 1576 and was completed around 1580. The design was inspired by Andrea Palladio, the great Venetian architect. Uraniborg was one of the first buildings to reflect the influence of Italian Renaissance architecture in Denmark. The plan set the palace and research facilities in the center of a square, fenced garden, but, in a daring gesture, its axis was rotated 45 degrees. The complex is precisely oriented to the compass points.

An account in Wikipedia states: "The plan and façade of the building, and also the plan of the surrounding gardens, are designed on grids, with proportions that Tycho carefully specified. These proportions may have been intended to make Uraniborg function as an astrological talisman, benefitting the health of its occupants by increasing the influences of the sun and Jupiter … A large wall, 75 meters on a side and 5.5 meters high was planned to surround Uraniborg, but was never built; instead, a long, high earth mound was constructed. That mound has lasted until modern times, being the only remnant of the observatory still in place." Shortly after Brahe's death, this costly complex was destroyed, in part because it lost the support of Denmark's new King Christian IV.

The rotated axis was not Brahe’s only diagonal engagement. Diagonal struts appeared in the sextants he used in his astronomical sightings. There is also a correspondence of sorts between the struts and the geometry in the parterres of his gardens, but this aesthetic/psychological connection is speculative. Important is the fact that rather than entrance walkways leading to the palace starting at the midpoint of each boundary wall, Brahe designed walkways leading in from the corners as true diagonals. These walkways leading from the corner gatehouses to the building entrances were used by students, assistants (most significantly Brahe's daughter), royalty, friends, and other family members. This may have been inspired by a new angular geometry emerging during the Renaissance. The diagonal theme is echoed in some of the parterres that were designed for decorative reasons and also to supply herbs and the like for cooking and scientific studies. The gardens are currently being restored.