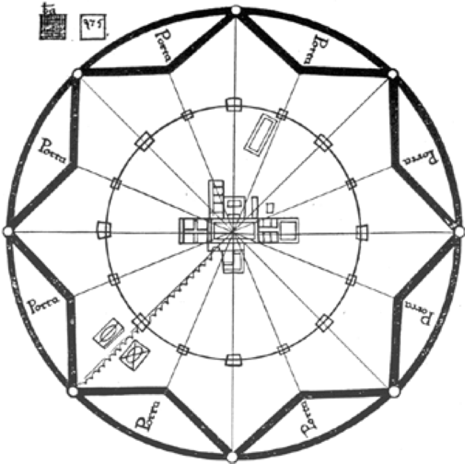 A dramatic cultural shift occurs as the medieval concept of geography is taken over by the Renaissance perspective. Medieval maps of the world were fictions and did not relate to the world as it was. Instead, a Christian fiction of the world was fabricated with the holy city of Jerusalem placed in the center. In other maps, Christ’s body became the cartographic shape into which geographic facts were squeezed. This corruption of reality was dramatically overthrown during the Renaissance. Geometrically correct representations were the overriding objective. Alternative ‘projections’ were tried and the most enduring occurred in 1569, with the development of Mercator’s map of the world. However, the view of the cosmos remained rooted in another fiction, which was that the earth was the center of the cosmos. This belief continued until the time of Copernicus in 1543. According to Christian Norberg-Schulz, “With these two approaches the Renaissance image of the world unified empirical, homogenous space and ideal, centralized space.”

These images are synthesized in the notion of the ideal city. “Whereas the medieval city was ideal inasmuch as it was a living concretization of the Civitas Dei, the Renaissance city aims at ideal form. Scientific studies were made of town design, although it was not until 1593 that an ideal city was built, Palma Nova, by Savorgnan and Scamozzi…numerous architects published treatises where the problems of the city are analyzed with the aim of working out ideal plans. The first plan for an ideal city, Filarete’s Sforzinda (1464), is based on a circle with a star inscribed...”

Sforzinda is an eight-pointed star inscribed within a circle with another smaller independent circle concentrically placed within. An orthogonal arrangement of buildings in the center of the town is connected to one of the points (perhaps a gate in the circular fortification wall) by a singular radial element of unknown purpose. A nine-sided polygon (nonagon) is the shape of Palma Nova, a figure that is repeated in a series of concentric streets culminating in the town center. These streets are interrupted by radial streets, which lead to the arrow-shaped fortification projections. Both these plans, one a proposal, the other a still extant example east of Venice, are interesting departures from the organic plans of the middle ages and the orthogonal plans that existed from the dawn of civilization.

Alberti, in addition to being credited with the codification of the rules of mechanical perspective, is important also as regards Diagonality in terms of his theories on architecture and the design of ideal cities. Before he ever designed a building, Alberti wrote De Re Aedificatoria (between 1443 and 1452). This treatise was the first coherent presentation of Italian Renaissance architectural theory and its significance as to its impact on the course of architecture through subsequent centuries cannot be over-estimated. 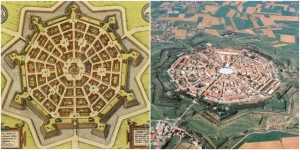 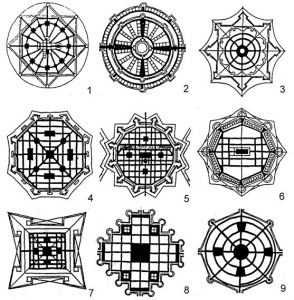 Although Alberti appreciated and saw great beauty in small towns, particularly hill towns with fortifications, as Kostof points out (Kostof 1991) “he favored in principal the geometrically organized city form.” In another chapter Kostof continues (Kostof 1991), “In the next century Alberti and others would equate a city with a palace. “The principal ornament of a city,” in Alberti’s words, “is the orderly arrangement of streets, squares and buildings according to their dignity and function.” Beginning with Filarete’s Sforzinda, Renaissance architects projected ideal cities with fixed perimeters and fully composed parts. In them the use of circle-based geometry as a proportioning device in urban design is clear.” One must be careful not to draw the conclusion that circle-based geometry means a city plan composed of a circle and other circular components because the plans in fact reveal a significant degree of angularity as in the aforementioned plan for Sforzinda.