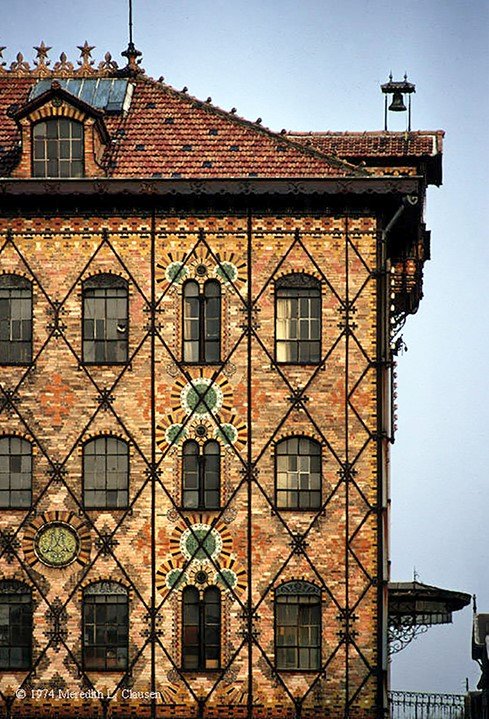 The Menier Chocolate Company was a major international industry headquartered in the town of Noisiel east of Paris on the Marne River. In 1872, the company initiated a major expansion, creating the most modern chocolate production facilities in the world. The company’s architect/engineer at the time was Jules Saulnier. His Chocolate Factory is widely regarded as one of the iconic buildings of the Industrial Revolution. In 1992, the French government designated Saulnier’s building an official Monument historique and it is now a UNESCO World Heritage Site. 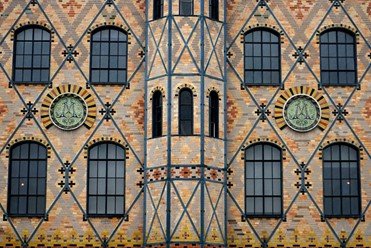 What is it that makes this simple rectangular brick building so remarkable? And why is it important regarding diagonality? It is the first skeleton-type iron building built with the skeleton carrying the full weight of the building. The skeleton sits on four iron girders, hollow in cross-section, which in turn sit on four stone piers set into the riverbed below. The noted architectural historian Sigfried Giedion wrote in Space, Time, and Architecture [1962, originally published in 1941]:

“This skeleton can be seen on the surfaces of the walls; the, latter, made of hollow brick, function merely as filling [and the weather-separating surface]. The diagonal iron stiffeners show clearly that Saulnier derived part of his inspiration from methods used in wood construction.” 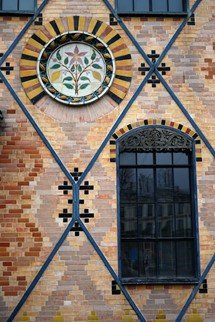 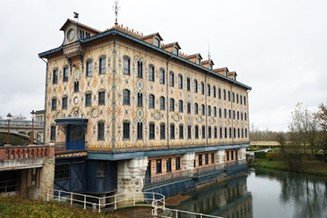 One wonders whether the owners of the company asked for the building to be so extravagantly colorful and elaborately decorative? Or was the architect so carried away with the pleasure of chocolate that this fanciful building was to pay homage to that dark sweet substance that previously had been used only to coat medicines made by the Menier family. The diagonal motif, while obviously decorative, is also structurally advantageous in preventing the structure from deforming under wind loads. Puddle iron was used for the diagonal framing. It is less granular and brittle than the more common cast iron. Would this building have ever been built before the diagonal motif was about to explode on the cultural scene and dramatically change all the arts in the coming century and still today in the 21st century?