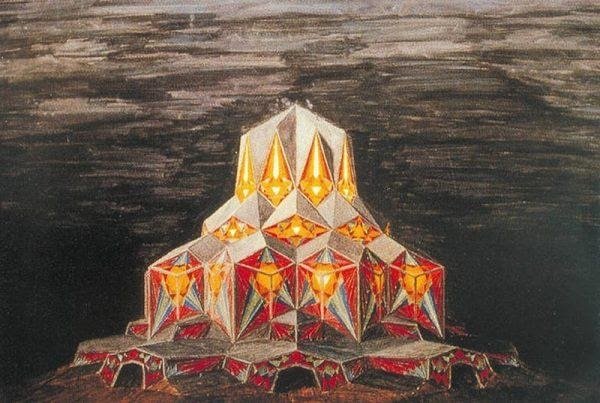 Crystallography is the science of determining the geometric arrangement of atoms in natural crystal structures. This science is largely rooted in critical studies performed during the 19th century. One such investigator was the German mineralogist and physics instructor Christian Samuel Weiss (1780-1856), whose concepts regarding such notions as crystallographic axes and crystal systems created “…a formal edifice in which much of nineteenth-century crystallography found a compatible home and a place to grow.”

It is doubtful that the great American architect Frank Lloyd Wright (1867-1959) knew of Weiss’s contributions, but the master was influenced by the teachings of Friedrich Froebel, who was not only a crystallographer in his early years but worked directly with Weiss between 1812 and 1816. It is therefore reasonable to assert that there is a direct link between 19th-century scientific investigations into the emerging world of crystallography and the world of design at the end of the 19th century and into the 20th century.

This influence can also be seen in the mindset of a German architect in the first half of the 20th century, when Wright’s engagement with Diagonality was in full swing. Bruno Taut (1863-1915) built the 1914 landmark expressionist Glass Pavilion, or Glashaus, for the Cologne Deutscher Werkbund Exhibition. (The Expressionism art movement was fashionable in Germany at this time.) The Glashaus, destroyed at the end of the Exhibition, was intended to “demonstrate the potential of different types of glass for architecture,” and to indicate how glass could “orchestrate human emotions.” The dome consisted of diamond-shaped panels held in place by a diagonal web of thin concrete frames, known as the Keppler system. It was intended to express the complex geometry of nature, a keen area of scientific investigation, as indicated above, throughout the previous century.

Taut was deeply influenced by the fantasist German writer Paul Scheerbart (1863-1915), particularly his 1914 novel, whose protagonist Edgar Krug was the “glass architect.” Taut dedicated his Glashaus to Scheerbart, whom he called his “Glass Papa.” The novel reveals Scheerbart’s commitment to the use of glass in modern architecture and is an outgrowth of his first novel Das Paradies in which he advocated a transformative new architecture of glass. After the Glashaus, Taut went on to even dreamier visions about glass in architecture in his 1917 book Alpine Architecture, in which he writes about “glowing crystal houses and floating, ever-changing glass ornaments.”