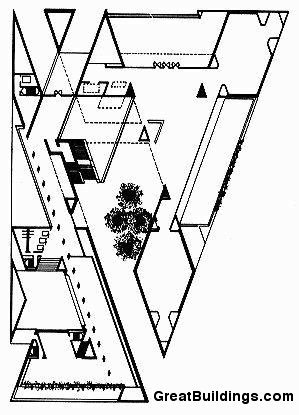 One of the most sophisticated examples of 20th century Diagonality is I. M. Pei’s East Wing of the National Gallery in Washington, DC (designed in 1968 and opened to the public a decade later). In dramatic contrast to the original wing of the building, a classically designed, orthogonal structure, Pei’s addition is an angular composition conforming to and echoing its site's triangular shape on the mall.

The acute-angle geometry of the site results in some walls of the building terminating in surprisingly sharp angles. Visitors to the building have been so arrested and amazed by the sharpness of one particular 19-degree Tennessee marble corner that the knife-edge is visually marred by a flare of hand oils. It is an architectural corner that beckons to be touched to be believed.

This building’s geometric motif is intertwined with a revolution that embraced a new geometry because it was during this time that much of the nation was erupting in political upheaval. Protests against the war in Vietnam, for civil rights, and for freer lifestyles were causing turmoil everywhere. There appears to be a correlation linking times of social upheaval with periods of pronounced diagonality in works of art and architecture. The Russian Revolution of 1917, for instance, occurred around the time many Russian artistic movements appeared that employed diagonals as their dominant geometry. Is it coincidence or is there a true linkage? It's hard to escape the conclusion that the linkage is real.

Pei had struggled previously to achieve the level of refined detailing, grace, and geometric subtlety that he finally achieved in the East Wing. He knew his addition needed to complement the 1930s original wing, designed in the neo-classical style. But Pei’s unrelenting diagonal motif was not achieved at the cost of the building’s functionality. Although slightly “bunkerish” on the exterior, the interior sings with daylight, which enters the grand interior sculpture court through a skylight integrated into a triangulated, spirit-lifting spaceframe. Andrew W. Mellon, the benefactor and project leader, wanted a building for art that was itself a work of art. His dollars and those of other contributors bought the right architect to deliver a masterpiece. The East Wing is a supreme example of modern architecture at its best. It raised the diagonal motif to a position of respected eminence. No longer was the diagonal a renegade geometry; it was now central to the vocabulary of architecture’s future.