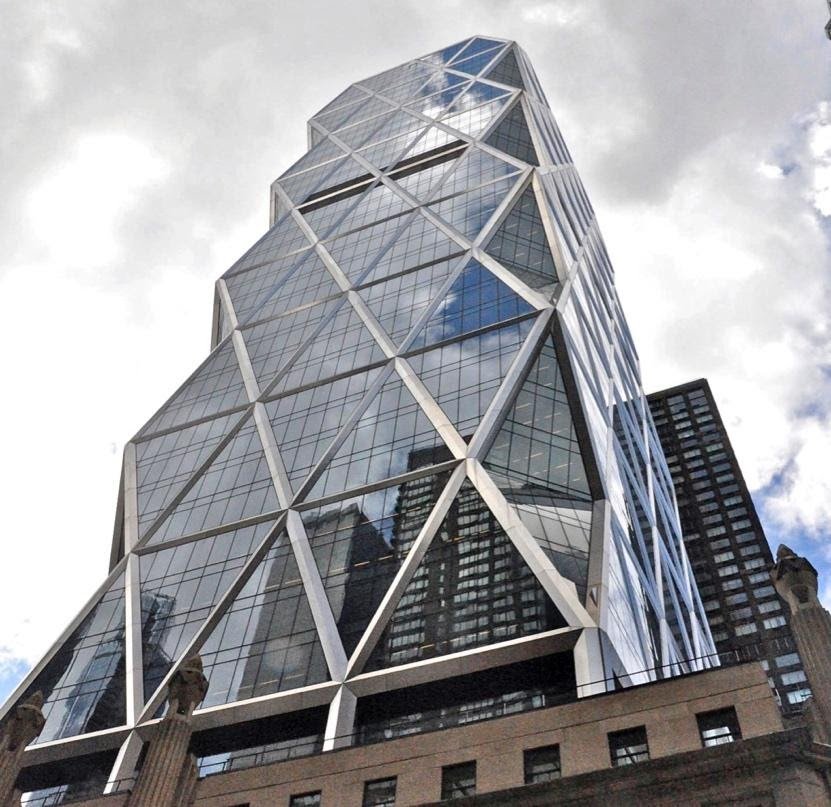 A building with pronounced diagonality sits atop William Randolph Hearst’s six-story, late-1920s Art Deco corporate headquarters in New York City. Hearst demanded that his building be engineered to support a future skyscraper. Sir Norman Foster, an English architect, followed through with his design of the 46-story Hearst Tower. It opened in 2006. The uncommon triangular framing system, called diagrid, involves slanting columns and jagged corners that zigzag up the building’s exterior. This arresting design feature (called "bird’s mouths") required the development of a special window-cleaning system that itself cost $3M to build and three years to develop. The diagonal cladding is meant to echo the image of a skirt floating lightly above the masonry base. The six-story lobby, which occupies the entire floor plate of the original structure, features angled columns that redirect structural loads from above to points in the old building that can accommodate these loads.

The diagonal motif is also expressed in the angular positioning of the escalators that slice through a 3-story-high water sculpture, carrying visitors up to the main lobby. Ice Fall, by artist/designer James Carpenter, involves 50 tons of cast-glass prisms and accent blocks arranged in a multitude of diagonal patterns that capture light from above and project it diagonally, thereby echoing the theme of the tower’s diagonal grid structure. The design appears to have been inspired by City Hall Tower, an unbuilt zigzagging high-rise structure created by Louis I. Kahn and Ann Tyng, Philadelphia architects. The City Hall Tower project, created in the 1950s and meant to promote the use of concrete, caused an international architectural sensation and dramatically changed the face of high-rise design.