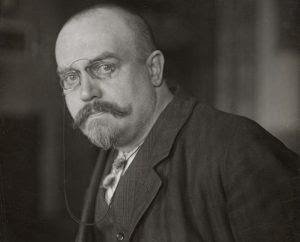 Architect Bruno Taut was deeply influenced by fantasist German writer Paul Scheerbart (1863-1915), particularly his 1914 novel whose protagonist Edgar Krug was the “glass architect.” Taut dedicated his Glashaus to Scheerbart, whom he called his “Glass Papa.” This novel reveals Scheerbart’s commitment to the use of glass in modern architecture and is an outgrowth of his first novel, Das Paradies, in which he advocated a transformative new architecture of glass.

Scheerbart's non-fiction treatise titled Glass Architecture (Glassarchitektur), which he dedicated to Taut, spoke of glass vehicles and a new civilization based on crystal cities and floating continents of chromatic glass. In 1913 he tried to organize a “Society for Glass Architecture.” After the Glashaus, Taut went on to even dreamier visions about glass in architecture in his 1917 book, Alpine Architecture, in which he writes about “glowing crystal houses and floating, ever-changing glass ornaments.”

What makes glass a key element in the Phenomenon of Diagonality is its connection to crystallography and crystal shapes, there being an inherent potential for sharp angularity. The idea of glass shards, sharp edges, acute angles, and asymmetrical angularity. These qualities taken together position glass as a building material at the very heart of the Phenomenon of Diagonality. Similar to the emergence of iron and steel in the 19th and 20th centuries, sheet glass enabled architects to give form to their angular crystalline visions, which were so central to the cubistic visions that arose in the first decades of the 20th century.

Erik Morse, in a 2015 article for the Paris Review wrote, “Scheerbart, an eccentric, Danzig-born poet and architectural theorist, is best remembered through obscure citations from Walter Benjamin, Walter Gropius, and Bruno Taut. But in the spirited era of Berlin’s café culture, he was a popular serialist, publisher, and proto-surrealist. From the late 1880s to his premature death in 1915, he wrote prolifically on science, urban planning and design, space travel, and gender politics, often in the course of a single text.” Morse goes on to say, “Like his French contemporaries Camille Flammarion, Villiers de L’Isle-Adam, Raymond Roussel, and Alfred Jarry, Scheerbart’s prophetic oeuvre oscillated between themes of technology and aesthetics in a genre known in the Francophone world as fantastique.

“Translations of Scheerbart texts have trickled into the English-speaking realm; Glass! Love!! Perpetual Motion!!!: A Paul Scheerbart Reader, edited by Josiah McElheny and Christine Burgin, is the first attempt at an English-language collection. Assembled from his fiction and critical works, drawings and photographs, and secondary texts from friends and acolytes, the book’s publication hopes to inspire what McElheny calls a new generation of “Scheerbartians.””