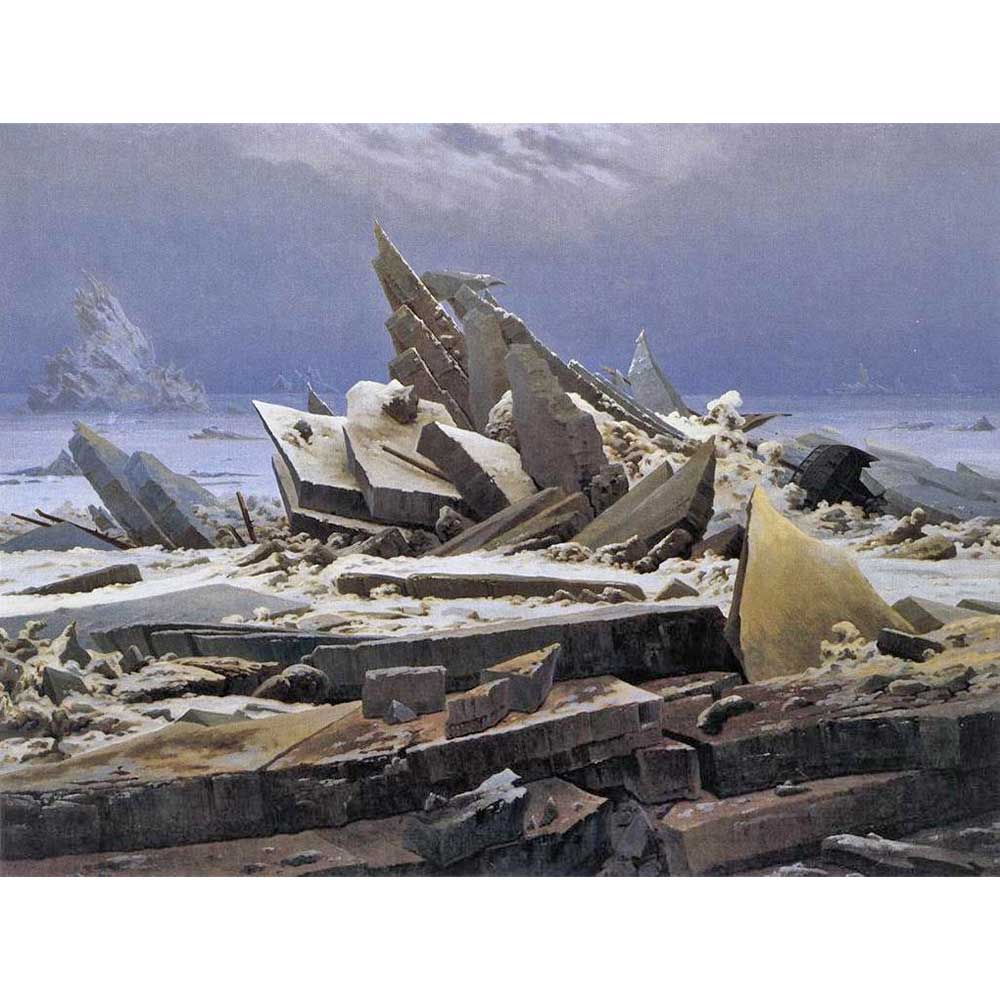 During the first quarter of the 19th-century, a striking and memorable oil painting portraying a jagged mountain of ice in the North Sea was executed by the great German Romantic Era artist Caspar David Friedrich (1774-1840). The work, also called The Sea of Ice [in German: Das Eismeer], is one of the finest pre-modern paintings to capture the spirit, energy, and very corpus of Diagonality. In that sense, the painting foreshadowed the angular geometric motif that was to alter the essence of art and culture that emerged at the start of the 20th-century. Horizontal slabs of ice looking like they are made of stone appear at the bottom of the painting, but they rise inexorably in crisscrossing jagged shards creating an almost religiously spirited composition. The pile of ice sheets appears to reach for a trace of sunlight emanating from a thin scattering of clouds above the icy pyramidal mass below. An almost invisible trace of the doomed ship’s mast slants up at a low angle through the ice and culminates in a threatening, dart-shaped pinnacle. Diagonals were a compositional feature that ran through many of Friedrich’s major paintings and also through his extensive oil studies of ice floes on the river Elbe, near Dresden. Caspar David Friedrich was generally considered the most important German artist of his generation. His ideas for paintings often came to him in dreams. The dream for the "The Wreck of Hope" was likely motivated by an incident in his youth (age 13) when his younger brother Christoph reportedly saved Caspar from falling through the ice of a frozen lake and in turn lost his own life in the rescue.

The painting was first shown in 1824 with the title An Idealized Scene of an Arctic Sea (with a) Wrecked Ship on the Heaped Masses of Ice. A piece of the dark stern of the ship is visible to the right of the pyramid of ice in the center of the painting. The Wreck of Hope was seen at the time as too radical in composition and too harsh in subject matter with its icy palette, fearsome monumentality, grim subject matter, and dramatic intensity. Given its rejection, it went unsold until after Friedrich’s death in 1840. It was well before this date that the artist fell from favor in the art world and died lonely in obscurity, ill health, and poverty. However, Friedrich’s artistic vision rose from the fickle ashes of art history both in later nineteenth-century polar paintings by other artists and at the start of the 20th-century when the global phenomenon of Diagonality was just coming to the fore. Thirty-two of his paintings were exhibited in Berlin in 1906; fifteen years later, in the 1920s, the Expressionists discovered his work and were influenced by it. Another resurgence of interest in his work occurred again in the early 1930s. American architect Thom Mayne, known for his highly diagonalized building designs, regards Friedrich’s ice painting as a primary influence (an antecedent of sorts) impacting more directly his approach to the dynamic relationship between architecture, landscape, and nature.