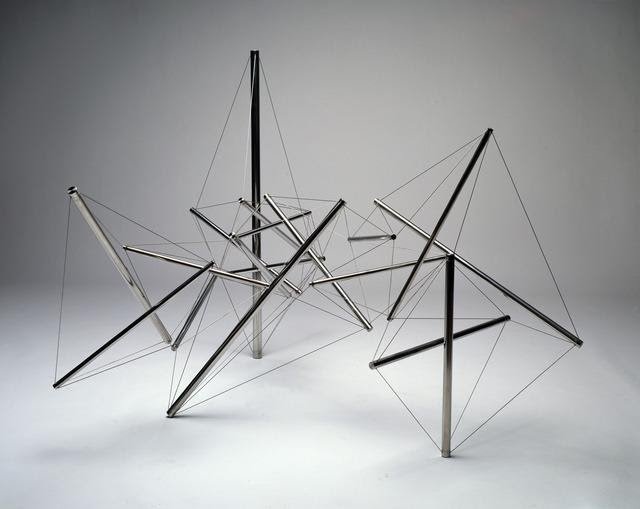 Growing up in Pendelton, Oregon, Kenneth Snelson (1927-2016) loved to build model airplanes using balsa wood struts and Japanese paper. He liked the way the damp paper dried and drew tight around the balsa wood skeleton—the paper skin becoming drum-tight under tension, and the balsa wood struts gaining strength in compression. This experience of working with integrated and balanced structural forces stayed with Snelson through his school years and beyond.

Despite his longstanding interest in modelmaking, Snelson initially pursued painting. He was particularly enamored with figures like Josef Albers, Lionel Feininger, Wassily Kandinsky, and Paul Klee, all of whom might be called diagonalists if such a term had existed back then. While in a library at the University of Oregon, Snelson read about Black Mountain College in North Carolina. When he discovered that Josef Albers, a former Bauhaus instructor, was dean of Black Mountain College, he and a friend decided to apply for admission to the summer session in 1948. (Albers' involvement with Diagonality will be presented in a separate profile.) Snelson spent two summers at Black Mountain College, which turned out to be pivotal in his career development. Although Snelson went to the College to study painting, Albers sensed Snelson's "feel" for object making and encouraged him in that direction. This shift of his interest to three-dimensional objects (which was more of a return to an earlier interest) was mainly due to his interaction with Richard Buckminster Fuller. Fuller was fifty-two years old at the time and regarded by many as a "delightful nut." It was only later that Fuller's true genius was recognized. Fuller was already calling his structural theory of balanced structural forces "tensegrity". The word grew out of the ideas of tension and structural integrity. He arrived at Black Mountain with an aluminum trailer packed with his "magical world of mathematical models."

Snelson recalled that he was "absolutely hypnotized and electrified" when Fuller launched into a three-hour lecture that captivated his audience of students and teachers. Bucky's talk dealt with his energetic and synergetic geometry based on the tetrahedron. In Snelson's two summers at Black Mountain College (1948 and 49), Fuller was continuing to focus on "doing more with less," and Snelson said that for the first time he was beginning to understand that structure was not just a matter of filling space with forms but "a result of forces which can form stable systems." Before returning for his second summer at Black Mountain, Snelson constructed a small stabile sculpture called Early X Piece. Two wooden, organically-shaped crosses were structurally connected only by nylon tension lines. One cross floated above the other, its position in plan view rotated 45 degrees from the cross below it. He mailed photographs of the model to Fuller and brought the sculpture with him when the summer course began. Recognizing the potential of the structure, Fuller asked Snelson to build a larger version in metal.

A schism between Fuller and Snelson developed when Fuller took credit for Snelson's discovery of discontinuous (not touching) compression members suspended in space and held in place by taught connecting wires or filaments in tension. Snelson was not consciously motivated to create a work that would be identified as an expression of Diagonality. Why? Because no such phenomenon had been identified back then. However, that is not to say that Diagonality as a design motif was not evident everywhere and may have subconsciously affected Snelson's aesthetic predisposition. The diagonal was there to be seen in every country (if you could recognize it) in architecture, graphics, city planning, engineering structures, fashion, painting, and sculpture.