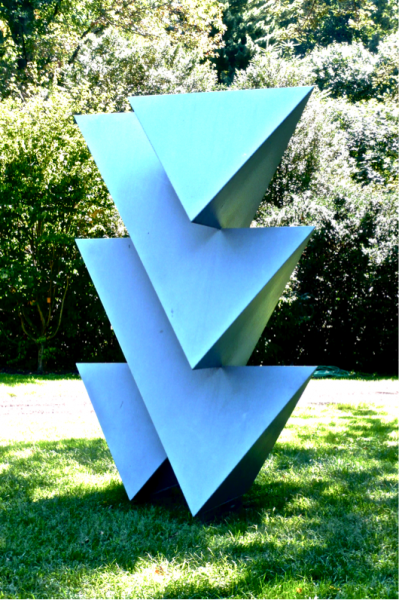 Simple Beginnings is a central theme in the work of architect-turned-sculptor Robinson (Robin) Fredenthal(1939-2009). In his youth, Robin excelled in lacrosse, football, and basketball, but around 1960, when he was in his early 20s and starting his architectural studies at Penn, he discovered that he couldn’t move as fast as he once did. Nor could he continue to sit at a drafting board or maintain control over pencils, triangles, and T-squares. By 1964 his studies at Penn were interrupted by the illness that would later be diagnosed as Parkinson’s disease. But his love for design, geometry, and sculpture endured and filled him with a passion to give form to the geometric shapes that continued to fire his untiring imagination. He also saw for the first time the work of sculptor Tony Smith, on exhibit at Penn’s Institute of Contemporary Art in 1966-67. That artist’s steel forms, brimming with angularity, had a profound impact on the development of Robin’s art.

Robin was also influenced by the work of his Penn architectural professors Louis Kahn, Robert LeRicolais, Romaldo Giurgola, and Anne Tyng, who were themselves exploring a vocabulary of geometric forms that Joel Levinson groups under the conceptual umbrella of Diagonality. Philadelphia at the time was a hotbed of experimentation in this rebellious geometric motif. Students and professors alike were twisting conventional box-like forms into sharp-angled designs that challenged the dominance of the age-old, reliable right angle. Expressions of Diagonality can now be found in every city and museum around the world.

One of the solid shapes upon which Diagonality was based back in the 1960s is the regular tetrahedron. Hard to visualize for some people, this four-sided pyramid is composed of equilateral triangles on all four sides, including its base. This form, the simplest of the five Platonic solids, resonated deeply with Robin, who said to a colleague, “I feel like geometry is God-given.” When Robin was asked what he would do or say if aliens visited him from outer space, he said he’d hand them a model of a tetrahedron. A fitting answer from an artist who understood the elemental nature of the diagonal and its pervasive artistic expression in Diagonality.