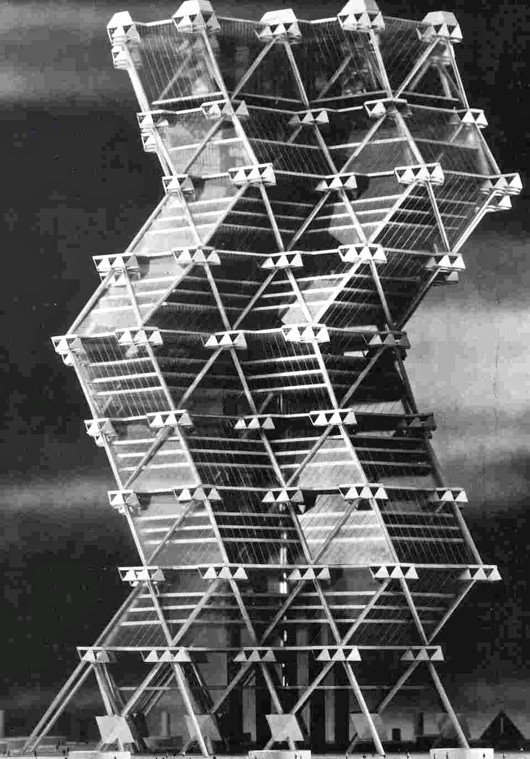 Philadelphia architects Louis I. Kahn (1901-1974) and Ann Griswold Tyng (1920-2011) imagined a hypothetical skyscraper called City Tower Project for a site in center city Philadelphia. Three years after the design work was completed, a model was exhibited in the Museum of Modern Art’s 1960 exhibition, “Visionary Architecture.” The result throughout the worldwide architectural community was electrifying.

One of Kahn’s employees who worked on the project was another Philadelphia architect who became famous in his own right, Robert Venturi. In his revolutionary book Complexity and Contradiction in Architecture – A Gentle Manifesto, Venturi’s chief objective in discussing the diagonal appears to have been to establish broad categories of use as expressed by the masters of the time. Venturi points out that Mies van der Rohe and Philip Johnson, in their design for the Seagram Building in New York (completed 1958), reject any expression of diagonality; all the structurally required diagonals are hidden within a pure soaring box elegantly clad in glass and bronze mullions. Kahn has likened the building to a pretty woman wearing a corset.

However, Venturi points out that Kahn overuses diagonality in the City Tower Project at the expense of other functions. But Kahn and Tyng’s objective was never to design a building that would be constructed but “simply” to design a dramatic structure that would promote the use of concrete; that’s why the Portland Cement Association hired them. Despite Venturi’s criticism of the tower, the building, with its groundbreaking geometry based upon a structural unit that employs a skeletal expression of the tetrahedron, was published in countless professional journals around the world. Modern architecture was changed forever.

The mid-century design of the tower with its forward-sloping and back-sloping walls of glass infused new vigor and direction into the global Phenomenon of Diagonality. It was an empowering vision that said that high-rise buildings no longer had to stand erect like upturned shoeboxes; they could zigzag, lean, and twist—and indeed, many of those that followed did. One such project is the Puerta de Europe in Madrid, Spain, designed by U.S. architects Philip Johnson and John Burgee.