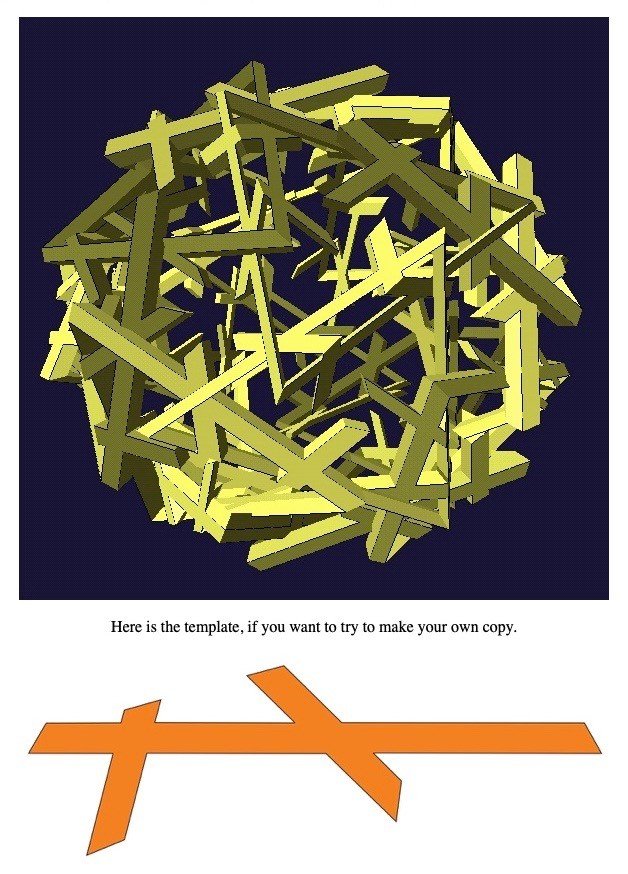 George Hart’s The Triangles Which Aren't There, refers to an interesting visual effect. It is very difficult to perceive the underlying geometric structure from a photograph, but in person, one at first sees it as a set of bars which form twenty interlocked triangles. This interplay is at the heart of Hart’s work as a sculptor of geometric forms. He uses a variety of media including wood, paper, metal, plastic, and assorted household objects to investigate geometry that has been given physical form.

Hart describes his works as classical forms pushed in new directions. He says, “The integral wholeness of each self-contained sculpture presents a crystalline purity, a conundrum of complexity, and a stark simplicity.” These are qualities one associates with modern-era Diagonality. The artist has been interested in and has a section of his extensive website devoted to this topic polyhedra and art. However, he explains, that his geometric constructions blend math and art more evenly than his purely mathematical treatises. A visit to George Hart’s website will impress with the sheer depth of his engagement with this interdisciplinary potpourri of topics. Hart also shares links to many other geometric sculptors that reveal the degree to which the diagonal motif has permeated an art form once focused primarily on the smooth contours of the human figure.

Hart is a research professor now retired from the engineering school at Stony Brook University. His works are installed around the world, particularly in university settings. He was a co-founder of the Museum of Mathematics in New York city. His book Zome Geometry, co-authored with Henri Piccotto is available through the DDVM bookstore.