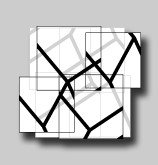 In the mid-1960s, after discovering information aesthetics as taught by Professor Max Bense, Manfred Mohr (b. 1938) turned from abstract expressionism to computer-generated algorithmic geometry. Born in Pforzheim, Germany, he lived also in Barcelona and Paris before taking up permanent residence in New York. Almost every one of his works in his newly adopted computer-generated geometric mode of expression reveals a pivotal embrace of Diagonality. This engagement with Diagonality, however, did not result from an understanding of the historic roots of the diagonal motif nor of the cultural Phenomenon of Diagonality that swept the world in the 20th century. Like almost all modern artists working in the angular genre, it was a "blind" engagement with Diagonality. However, this blind engagement in no way diminishes the significant artistic merits of Manfred Mohr's works. In fact, it elevates his body of work because his use of the diagonal springs from subconscious artistic sources.

From 1957 to 1961, Mohr was a jazz musician (tenor sax and oboe). In 1960 he turned briefly to action paintings until he came under the influence of Bense's information aesthetics in 1961. In 1962, living in Barcelona, his palette turned exclusively to black and white. Between 1964 and 1967, he studied at the Ecole des Beaux-Arts in Paris. Experiments in geometric themes led to hard-edge painting.

It was in 1969 that Mohr started drawing with a computer. In 1972 he began producing sequential computer drawings and then computer-generated animations. In 1977 he introduced "Diagonal-Paths" into his work. Diagonal-paths continued as a major motif in his work even though he continued to explore multi-dimensional mathematical forms of expression. Mohr states in the exhibition catalogue "Manfred Mohr CUBIC LIMIT II, Generative Drawings" Galerie Pierre Weiller, Paris 1977, "While always maintaining the rigid structure of the cube, I destroyed the three-dimensional illusion as well as the symmetries of the cube, drawn in two dimensions, thus creating generators of two dimensional 'êtres graphiques'."