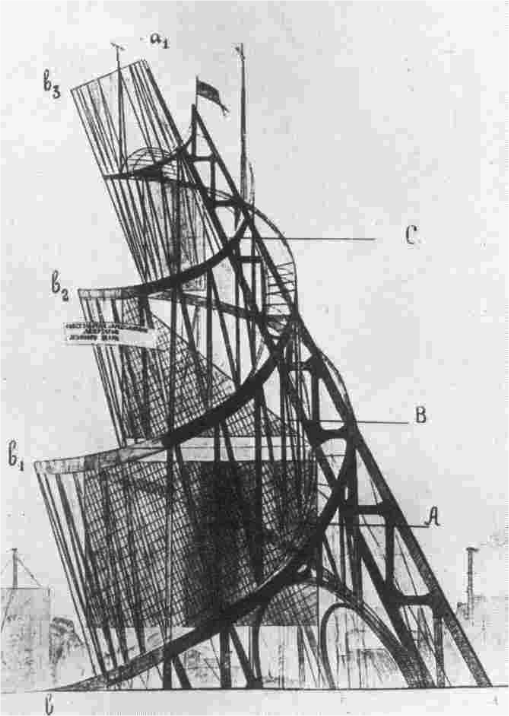 Vladimir Tatlin’s Monument to the Third International (1919-1920) has an assured place in the history of Diagonality. A Constructivist work that, according to some accounts, was intended to be an office building, it is a leaning, spiraling steel structure that was also designed as a towering symbol of modernity. It was composed of a twin helix that spiraled upwards to a height of 400 meters, dwarfing the Eiffel Tower in Paris. Four large rotating geometric structures were to be suspended in space and seen by visitors, who would be carried aloft on various mechanical devices.

Constructivism was an artistic and architectural movement that emerged in Russia beginning in 1919. Constructivist works influenced many other modern art movements such as the Bauhaus and the De Stijl. Images of the Tower can be found in most art history books covering the modern era. Importantly, it is a work that links the artistic expression of Diagonality to social upheaval.

The monument was intended for erection in Petrograd (now St. Petersburg) to honor the Bolshevik revolution of 1917. It combined a machine aesthetic with dynamic components that celebrated technology. Augmenting its thrusting, tilted skyscraper image, there were to be searchlights and projection screens meant to announce a new and dramatic change in the course of world culture. Tatlin’s Tower was to house lecture halls in a cube at the base of the Tower. Russian and Soviet critic Viktor Shklovsky reportedly quipped that the monument was “made of steel, glass and revolution.” The Tower initiated a period of exchange of ideas between Moscow and Berlin by such luminaries as El Lissitsky.

Large models of the Tower have been constructed in Stockholm, Moscow, Paris, London, and Norwich, UK. The inspirational power of Tatlin’s Tower continues; Ai Weiwei’s 2007 sculpture "Fountain of Light," once displayed at the Louvre in Abu Dhabi, is modelled after the "Monument to the Third International."