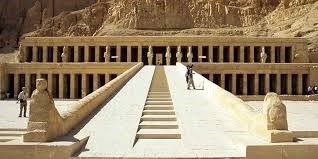 The 20th century Phenomenon of Diagonality has inspirational roots that go back over 4500 years to the architecture of ancient Egypt. One of those roots is the architectural ramp—not the temporary ones believed by some Egyptologists to have been used in pyramid building—but rather the permanent ones used in religious, governmental, and pharaoh-related processions. Although the pyramids have been visible since the time they were created, some ramps, such as those at Hatshepsut’s funerary complex, were buried beneath layers of sand and accumulating debris and had to wait until modern times, mostly in the 20th century, before being uncovered.

Ramps were used in temples to lead the faithful from one ceremonial terrace to another. The sloping diagonal thrust of a ramp appeared in stark and memorable contrast to the otherwise static, orthogonal composition of the religious complex it served. The ramps at Queen Hatshepsut’s rock-cut mortuary complex contrast with the simple dramatic composition of three broad terraces about 300 feet across that terminate against the mountain from which the temple was carved. The terraces and their columnar porticoes are united and accessed by these huge processional ramps that are almost as long as the terraces are deep. The ramps are beautifully scaled to the breadth of the terraces and seem to belong naturally to the adjacent mountain, the vast blue canopy of the sky, and the expanse of cultivated fields that stretch eastward to the Nile. The ramps roughly face in the direction of the temple complex at Karnak that was just then starting construction across the Nile to the east. Far beyond their functional value as simple means of ascension, the ramps of ancient Egypt were clearly used as expressive symbols of processional movement and of ascent toward a loftier state of being.

In the 20th and 21st centuries, the ramp reemerged as a deliberate aesthetic motif and also, in some countries, as a means of addressing the needs of the handicapped. In modern architecture, ramps have been used to tie together a stack of floor levels or to create a contrapuntal geometric contrast to right-angle construction as in Le Corbusier’s mid-20th century monumental Capitol Complex Chandigarh in India. Moreover, ramps today, by their very diagonal relationship to horizontal floor planes, add that final thrusting feature needed to make a building at once compositionally complete and also dynamic.