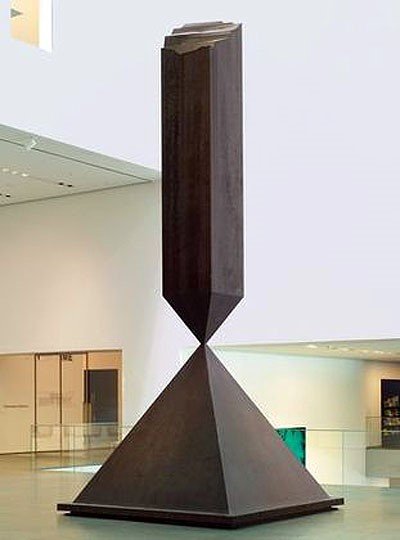 Barnett Newman's Broken Obelisk, also known as Black Needle, was one of the best pieces of sculpture of the mid-20th century. Four versions of the sculpture were fabricated out of Corten steel in the 1960s and now reside at Rothko Chapel, Houston, Texas; Red Square, University of Washington, Seattle, Washington; Museum of Modern Art, New York; and Storm King Art Center, New Windsor, New York.

The sculpture is significant regarding Diagonality for two reasons. (1) Its pyramidal base harkens back to ancient Egypt, a place and a culture of great importance to the history of Diagonality. (2) Diagonality, as something of a movement but absent practitioners conscious of their membership, was once again in its heyday when this work was being completed

In 1971, art critic Robert Hughes wrote about the work as follows: "Newman's pursuit of the sublime lay less in nature than in culture. This enabled him to pick ancient, man-made forms and return them to pristine significance without a trace of piracy. One index of that ability was his sculpture. Broken Obelisk, perhaps the best American sculpture of its time, is Newman's meditation on ancient Egypt: a steel pyramid, from whose apex an inverted obelisk rises like a beam of light. Here, Newman bypassed the Western associations of pyramids and broken columns with death and produced a life-affirming image of transcendence. That unruffled self-sufficiency, beyond style, gave Newman's work its mysterious didactic value. It is not 'expressive'; the silence at the core bespeaks a man for whom art was a philosophical activity, a way of knowledge."