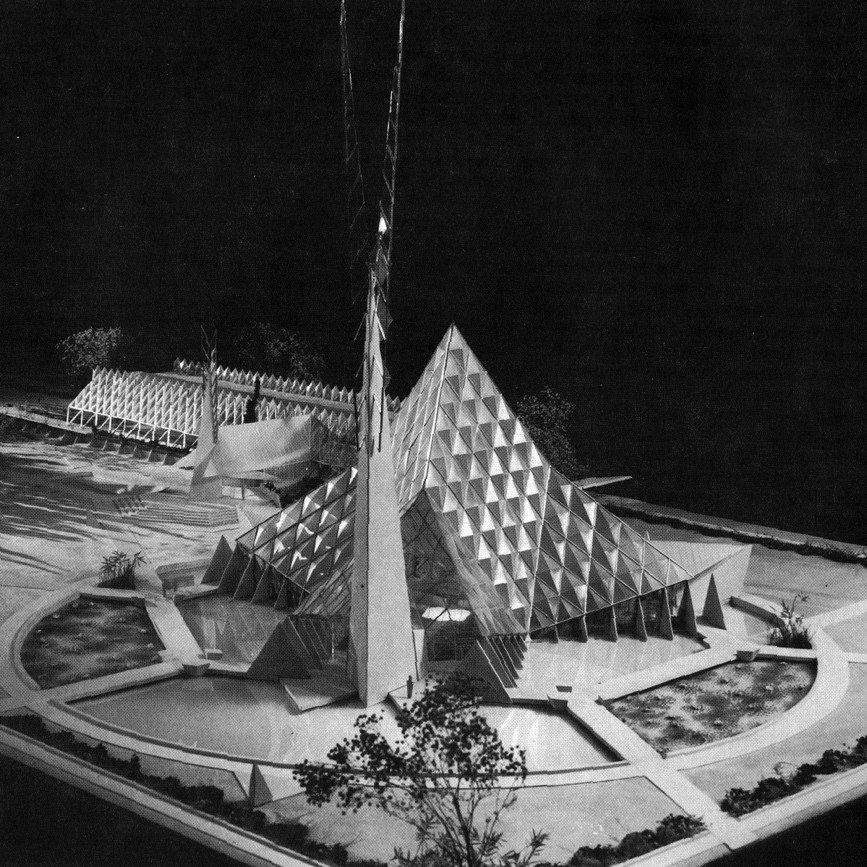 In 1949, Bruce Goff received a commission from the University of Oklahoma to design a non-denominational chapel. The Crystal Chapel Project, as it became known, was a design milestone in the architect’s career, but, sadly, as with many of his other innovative designs, it was never built. With expectations high, it came painfully close to being realized.

The Crystal Chapel utilizes the triangle motif, a motif that had already become a geometric favorite of Frank Lloyd Wright. Goff designed the chapel at a time when he was lecturing to his students at the University of Oklahoma on early visionary projects in Germany, particularly those that were part of the Expressionist movement. A 1960 article in Architectural Forum reported on Goff's chapel, commenting on its anticipated ethereal ambiance … made from rose-tinted glass with pink, glass-fiber insulation between." Although a triangular module is employed in forming the sheltering spaceframe, the overall scheme remains spatially symmetrical in many respects. Asymmetry in its purest form, however, is a distinguishing feature of 20th-century Diagonality and so Goff's chapel, statically symmetrical, comes close to but is not a perfect icon for the age of diagonality.

The Architectural Forum published the project in its July 1950 issue, including a photograph of an impressive model built by Goff's students at the University of Oklahoma. Praise for the project came from architect William Wurster, who had seen the model: "it had the possibility of being one of the outstanding buildings of our time." Yet, another architect described it as "equal, or superior to the greatest architecture of our time." Philip Johnson referred to it as a "magnificent design," and speaking on behalf of the Museum of Modern Art in New York, Johnson called it "the most beautiful project for a church that has come to our attention."