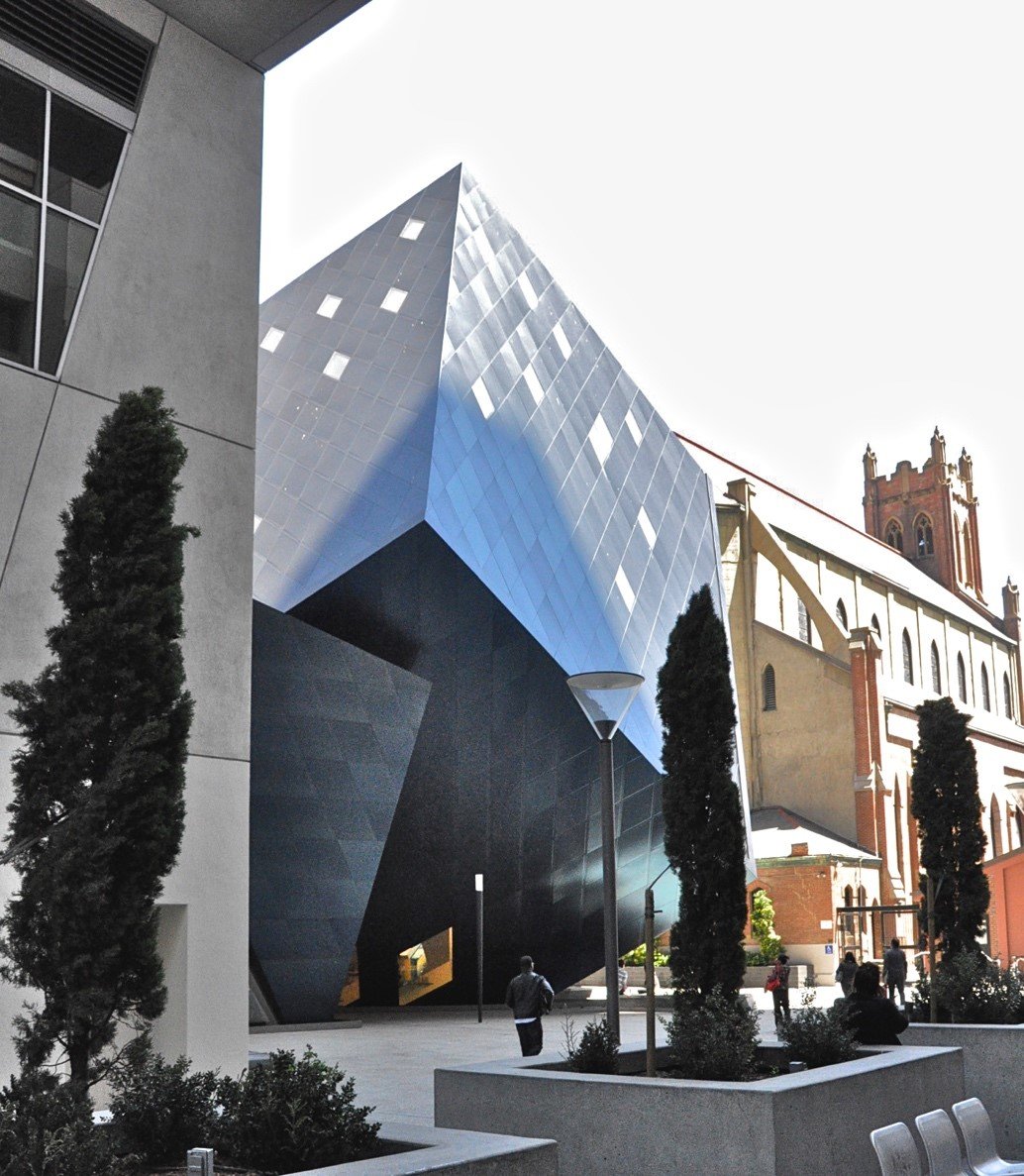 Daniel Libeskind rose to prominence because of his striking and highly honored Jewish (History) Museum in Berlin. Visitors report the building an emotionally overwhelming experience.

Libeskind, a daring and successful architect, was born in Postwar Poland, studied music in Israel, performed with great success, then turned to architecture, studying at Cooper Union in New York, then getting a postgraduate degree in History and Theory of Architecture at Essex University in England.

He has been prolific with major projects executed all over the world. Some observers, however, say that every one of his projects employs the diagonal as if he had forgotten the value of the right angle. The use of diagonals in his oeuvre seems more like an adopted trademark style than a program-generated or site-generated design feature.

The Contemporary Jewish Museum in San Francisco is a remodeling of the 1907 Jessie Street Power substation adjacent to Yerba Buena Park. The unmistakable tilted, dark-blue addition is a fascinating and immensely appealing piece of sculpture. Commentators from the Los Angeles Times and The Wall Street Journal lauded the work, including the comment, “a careful balance of explosive and well-behaved forms.” Both critics were relieved that Libeskind had abandoned his earlier sloping gallery walls for vertical walls. It is much easier to hang art on a wall that is plumb! Nevertheless, in the interior it seems that the architect was taking every opportunity to demonstrate his skill at handling diagonals more than in addressing the educational and display needs of the museum.

Some critics and architects observe that Libeskind stamps his tilting forms on almost every project he designs. When he adds additions to existing buildings he sometimes hacks into them as if with a hatchet. This may be appropriate once in a while, but more often than not it seems to show a disregard for the work of other architects. It seems he fails to respect expressions of serious architecture executed in earlier times. An example is his renovation and addition to the 135-year-old Bundeswehr Military History Museum in Dresden, Germany. He mangled the staid integrity of the existing design by aggressively slamming his V-shaped metal addition into the original classical structure.

Diagonality has offered an enabling freedom, but the question must be asked: Has it also at times resulted in a license to disrespect the serious work of others from ages past?