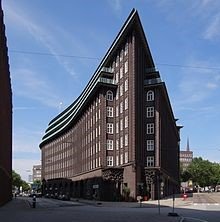 Expressionism is a modernist, avant-garde art and performing arts movement that originated in Germany in the first quarter of the 20th century. Initially it began with painting and poetry, eventually evolving and expanding to architecture, literature, theater, dance, film and music. The ideology of realism was rejected by the expressionists, as their objective was to convey the emotional experience vs. physical reality. Some of the most prominent artists in this movement were Edvard Munch, Wassily Kandinsky, Oskar Kokoschka, Franz Marc and Egon Schiele. Architects that created works that were imbued with the Expressionist mode design were Erich Mendelsohn, Rudolf Steiner, Bruno Taut and Hans Scharoun. In 1933 after the Nazis seized power in Germany, expressionist art was outlawed as degenerate.