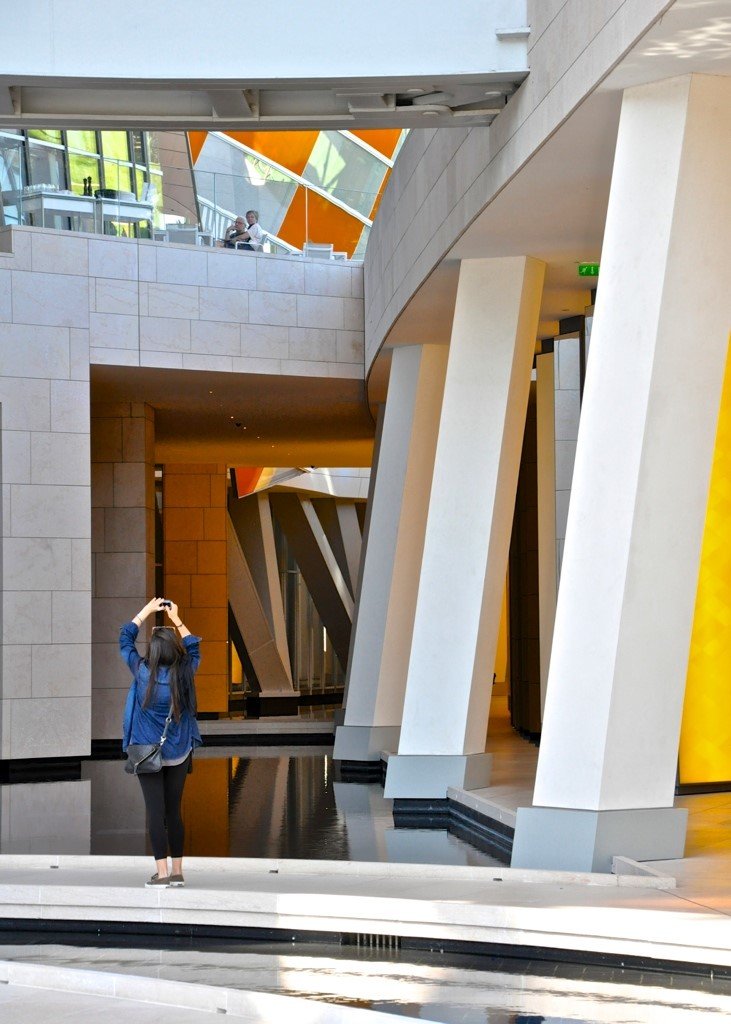 American architect Frank Gehry is known for his gestural curvilinear architectural forms that often originate in one of his exploratory scribbles. However, he also uses straight-line diagonal features in many of his buildings. Usually these features are structural elements such as beams, columns, struts, and braces. Such is the case at the Fondation Louis Vuitton designed by Gehry Partners and completed in 2014.

The sculptural complex is located in the Jardin d’Acclimatation and reportedly is meant to evoke 19th century glass buildings such as conservatories. The building sits at the end of an artificial waterway that flows sensuously over angled stone steps. The water appears to flow through between the pavilions and collects in a basin at the far end of the complex. Angled columns of steel and wood are reflected in the mirror-still water.

The angled columns in the photograph above echo the angled stone columns in some of the works of the famous Spanish architect of the last century Antonio Gaudi. His relevant projects include Parc Guell and the Sagrada Familia cathedral in Barcelona, which is still under construction after 100 years, just like the Gothic cathedrals. Gehry admits that he was profoundly influenced by Gaudi’s unorthodox architecture that uses curving forms and angled elements as if nature herself were creating Gaudi’s buildings. This is not surprising as Gaudi was a careful observer of nature and her sinuous and sometimes sharply angled forms. Curved forms and diagonality are not mutually exclusive. The line of many curves follows a diagonal path. Curved forms and angularity, however, are categorically and typologically distinct.

Existing under the cloud-sized parasol shades in the Fondation complex are more conventionally-shaped components, but angled struts shoot through and out from these boxlike elements to support the parasols. The effect is dramatic and highly sculptural. This project demonstrates the profound contribution of CAD (computer aided design) in visualizing and documenting for construction buildings that never could have been executed prior to the introduction of computers into the world of design.