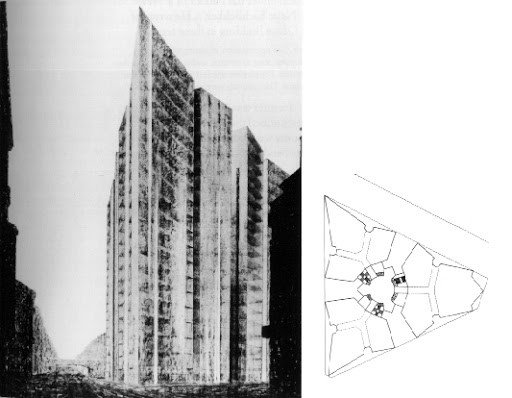 The architect of this unrealized skyscraper design was one of the major forces in modernist architecture in the 20th century, Ludwig Mies van der Rohe (1886-1969). With the following quote, the Museum of Modern Art puts Mies and this radical proposal for a glass skyscraper into perspective: “Mies’s career took off in the fertile atmosphere of Berlin after the First World War, where leading artists and intellectuals were forming a community that would draw the brightest talents from across Europe. His visionary submission for the 1921 Friedrichstrasse skyscraper competition, while not a winner, was an unprecedented embrace of the new materials of steel and glass that later defined modernist architecture.”

What is often overlooked about the design is its wholehearted embrace of the diagonal motif. There are no right angles in the entire plan except in the building core. This was a startling proposal when it was advanced at the start of the third decade of the 20th century and, based on the changing design of buildings that followed, it had a decidedly liberating effect on the geometric possibilities of high-rise structures. However, Mies’s submission, referred to as the honeycomb version, was initially overlooked and it was only slowly that the art and architectural world came to deem it the most groundbreaking and historically significant of all the competition entries. One can imagine the looks and maybe even the smirks on the faces of the competition jurors when this outlandishly severe and abstract entry was viewed among others executed in Gothic and Classical styles.

Certainly, Mies’ design was a sensible and inventive response to the triangular site, but it may also have been a deliberate search for a new artistic and architectonic language compatible with a quickly changing new world of materials, geometric motifs, and aesthetic sensibilities.