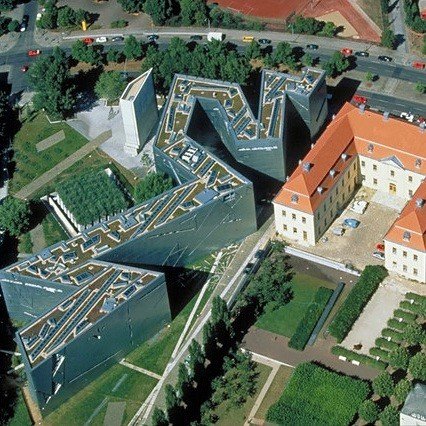 Daniel Libeskind won a competition announced in 1988 for a Jewish museum in Berlin. His deconstructivist-style design was radical in the extreme compared to other cooler more neutral submissions. Libeskind’s zigzagging design was nicknamed “Blitz” (lightning) perhaps because of its lightning bolt shape in plan and also because of the building’s windows that look like diagonal scars on the façade.

Libeskind has commented on the basis for his design saying the design was based on, “… the necessity to integrate physically and spiritually the meaning of the Holocaust into the consciousness and memory of the city of Berlin. Third, that only through the acknowledgement and incorporation of this erasure and void of Jewish life in Berlin, can the history of Berlin and Europe have a human future.” This void is represented by a sequence of voids of empty space that slice through the entire building.

The architectural gesture of the “slice” is recurrent in the modern age of Diagonality. It seems to arise from a sense of protest against injustices that have become apparent throughout the era of Diagonality. The slice is a gesture of anger, outrage, protest, perhaps even despair. It may also be a rejection of conventionality and a desire to attract attention.

Daniel Libeskind’s Museum opened 2001 illustrates axial rotation in the extreme. In this early project and others that followed, Libeskind seems obsessed with axial rotation as any book on his work will confirm. In the Jewish Museum a central axis is encountered and reencountered as one moves through this unorthodox, zigzagging and unsettling building.