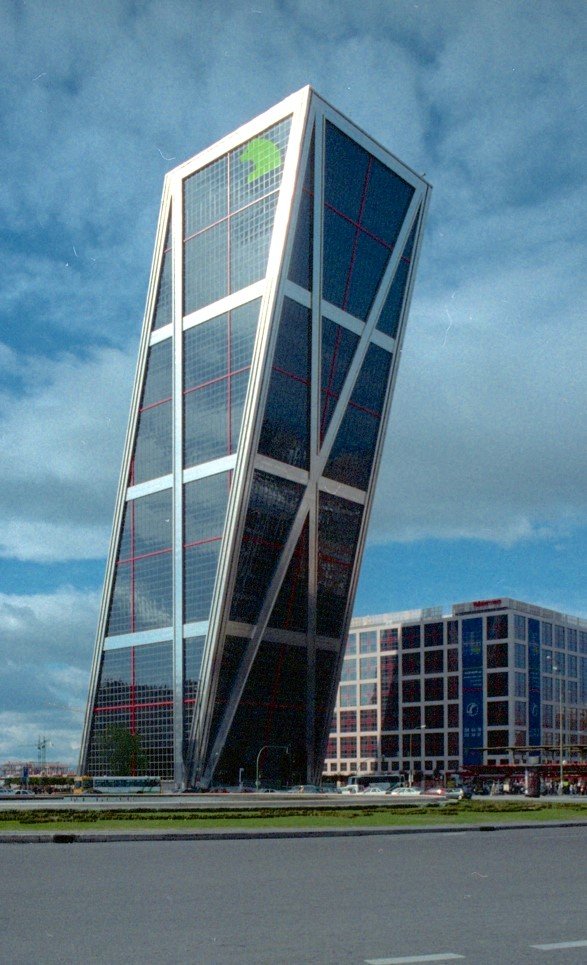 After Louis Kahn and Anne Tyng’s City Tower project was exhibited and widely published in the 1950s and thereafter, high-rise buildings no longer had to look like vertical shoeboxes; they could lean and sometimes twist—and indeed, many of those that followed, did. One such project is the Puerta de Europa in Madrid, Spain, designed by New York architects Johnson/Burgee.

The complex consists of the world’s first inclined towers, which seem to defy gravity by leaning toward one another over the Paseo de la Castellana, one of Madrid’s most important boulevards. Sloping at 15 degrees and with massive concrete counterweights (60x10x10 meters) below grade to stabilize the towers, the twin buildings straddle the boulevard while being set back from the street in order to clear a subway interchange. This pair of buildings inspired numerous canted towers in the following decades.

Cables buried within the buildings prevent them from tipping over. A diagrid structural system also stabilizes the buildings. Before the Age of Diagonality, such a design solution would never have been contemplated, but the diagonal motif, here employed primarily in a structural manner, freed the architects to take this daring departure from the strictly vertical high-rise tradition.

The mammoth scale of the stainless-steel-clad structural frame contributes to the spectacular quality of the complex but, unfortunately, the graph-paper grid of the dark glass curtain walls that fill in between the diagonals and horizontals of the structural skeleton contribute to an absence of human scale. This is made worse by the buildings appearing to have no visible entrances.

Philip Johnson, one of the architects of Puerta de Europa, and also the designer of the boxy but exquisite Glass House in New Haven, Connecticut, proclaimed, "We must end the right angle if we do not want to die of boredom."