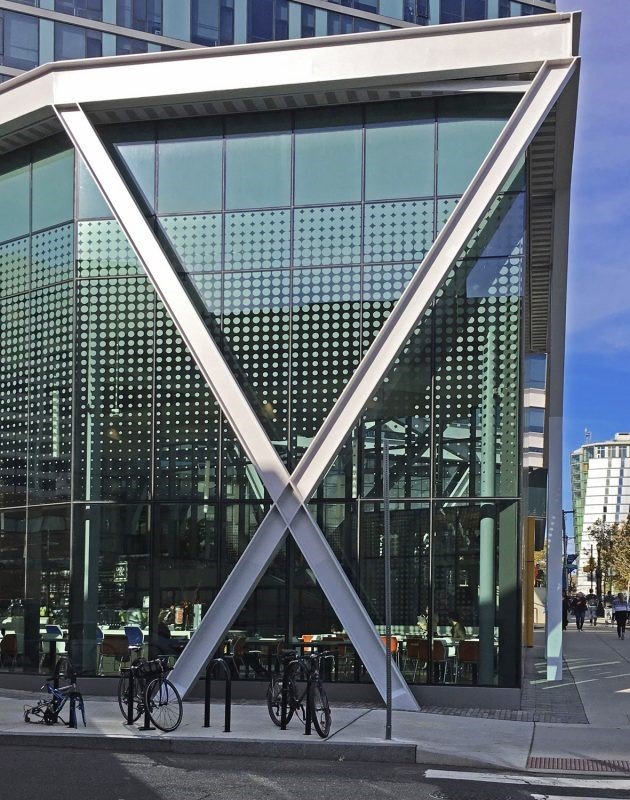 The Summit at University City
SCB, architects
2015
Executed by:
Date:

The diagonal motif in this project applies to the angular relationship of the main building blocks of the complex, to the structural expression on the ground level of the eatery (so named), and to the triangular shape of the entrance plaza with its broad flight of steps that lead up to the entrance to the dormitory blocks.

An array of structural-steel framing suggests an entrance canopy but there is no protective roof covering.

The angular structural scheme appears to be mostly decorative (although load bearing over the eatery). The diagonal bracing was probably required to keep the mostly glass eatery from deforming due to wind loads. 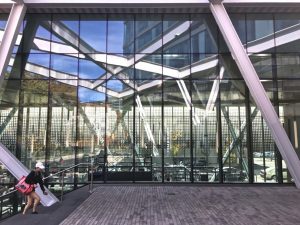 A way to describe the geometric patterning of the exposed structural members on the exterior and interior of the Eatery is to allude to the child’s game pick-up sticks. In playing this game, thin round sticks about the length of a pencil are thrown on a surface with the goal to pick up a single stick without disturbing the delicately balanced array of other sticks. Naturally, the thrown pile of sticks acquires a totally random pattern. This random, asymmetrical array is one of the central motifs of 20th century and post-20th century Diagonality. It is used in the Eatery and adjacent open-grid entrance canopy that floats above the angular plaza resulting in an appropriate effect for a university. A casual freedom is achieved that certainly must appeal to the mind-set of students and others who pursue knowledge and wisdom with a maverick’s attitude to packaged information. An open-ended geometry that thumbs its nose at conventionality can be viewed as the badge of intellectual freedom.

The ground level entrance treatment appropriately adds a sense of excitement and visual energy to the site, which slopes downhill in the direction of the main Drexel campus that fronts on Market Street a few blocks away.