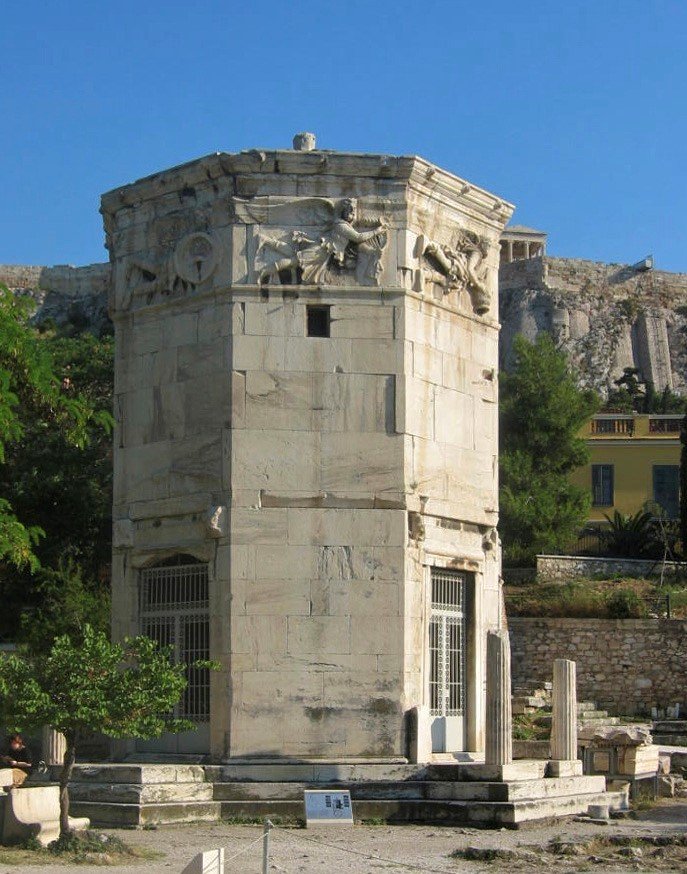 Tower of the Winds
Andronicus of Kyrrhos
48 BC
Executed by:
Date:

The octagonal Tower of the Winds was built in 48 BCE, roughly 240 years after the monumental lighthouse Pharos in Alexandria, Egypt was erected. Given the prominent place that Pharos and its octagonal upper story had in the architectural and cultural psyche of the peoples of the Mediterranean, it seems very likely that this lighthouse, and particularly its diminutive model in Abusir, influenced the geometry of the Tower in Athens. Pharos and the Athens tower were structures that served utilitarian purposes, and both were products of the Greek mind. Both reflected an omni-directional orientation, not an Egyptian single-axis orientation. Both took a figure from plane geometry and extruded it into three-dimensional form. The break from right angle architecture had occurred.

The Tower of the Winds was constructed by the Greek astronomer Andronicus of Kyrrhos. It was built to identify the direction of the wind using a weathervane and to measure the passage of time both by a water device clock and by a sun dial. Just as the direction of the wind is today an important piece of information for weather forecasting, air travel, and space flight launches, so too, knowing the direction of the wind in ancient times was considered to be vitally important—but for reasons of health. In Chapter VI of Vitruvius’s Ten Books of Architecture, entitled The Directions of the Streets; with Remarks on the Winds, Vitruvius goes into detail regarding the reasons for the construction of the Tower of the Winds. He begins with an expression of concern for the proper orientation of streets within a town whose fortification walls had already been constructed, explaining further that “cold winds are disagreeable, hot winds enervating, moist winds unhealthy.”

The Tower of the Winds is 42 feet high and 26 feet in diameter and has a band course of bas-reliefs near the top representing the various winds, each relief facing the direction from which the wind blows (i.e. the cardinal and intercardinal points). On the sides of the tower that face the sun are the hour lines of a sundial. On top of the tower is a conical shaped piece of marble that was surmounted by a weathervane in the form of a bronze Triton holding in his right hand a rod.

Former U.S. President Thomas Jefferson had a copy of James Stuart and Nicolas Revett’s 1762 book The Antiquities of Athens, which contains drawings of the tower in its presumed virgin state. Throughout history, the Tower of the Winds has been copied time after time, even as recently as 1992 by Clay Lancaster in pink stucco at his Warwick Estate in central Kentucky. The octagon became over time one of the most influential and frequently used non-orthogonal shapes in the history of architecture, contributing significantly to the flowering of Diagonality in the modern era.