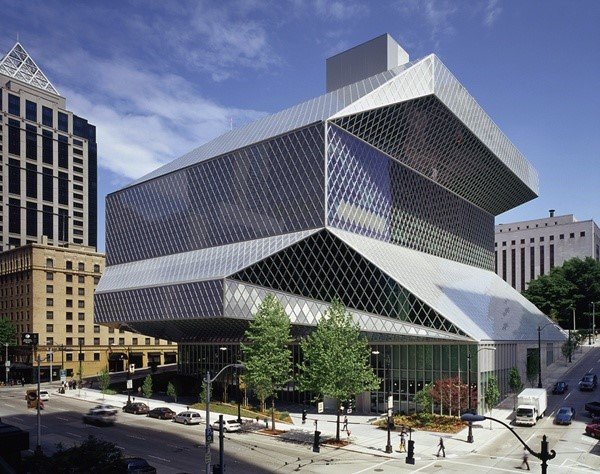 The Seattle Central Library is a dramatic and daring building that uses its glass curtain walls to create what is in effect an irregular, asymmetrical piece of civic sculpture. The project was a joint venture between Rem Koolhaas/OMA of the Netherlands, in collaboration with the Seattle firm, LMN. Construction was completed in 2004. The German firm, Seele GmmbH engineered and built the curtain wall (in Germany) while the building was still being designed. The library is surrounded by traditional, mostly orthogonal, masonry-clad structures. Those buildings set off the library’s skin with all its 20th century asymmetrical diagonality. The glass and metal enclosure began with the simple idea of wrapping all of the internal spaces with a continuous layer of transparency. LMN points out “Unifying these shifting planes of glass, a common diamond module has been utilized for the mullion framing across the entire envelope.”

This design presumably would never even have been considered in previous eras because the cultural and aesthetic mindset prior to the 20th century would likely have regarded the scheme perverse, offensive, and undoable. Herbert Muschamp, the former NYT architectural critic, described the library as both a “blazing chandelier” and “a big rock candy mountain of a building.” However, the reaction to the building has been mixed. Paul Goldberger who writes for the New Yorker declared the library “the most important new library to be built in a generation, and the most exhilarating.” Lawrence Cheek, an architectural critic for the Seattle Post-Intelligencer initially wrote favorably about the library but returned in 2007 and found the building “confusing, impersonal, uncomfortable, and monotonous.” The daring diagonal geometry of the building definitely renders it a visual delight. Whether that same geometric motif has prompted the negative critiques seems less supportable. The diagonal motif is simply an addition to the language of architecture; how that language is used is up to each architectural author.