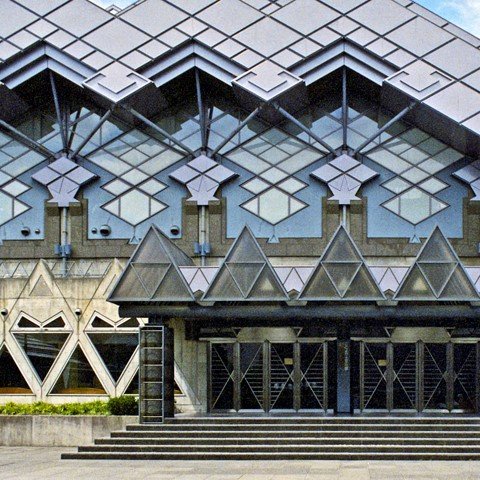 The Tokyo Budokan sports facility was built in 1989 in the Higashi Ayase Metropolitan Park in the Adachi-ku area of northern Tokyo. Its purpose was to host martial arts exhibitions, competitions, and training activities in Kendo, Judo, Karate, and Kyudo. Traditionally, a Budokan is an arena for martial arts, so there are many Budokan buildings in Japan. The Tokyo Budokan is not to be confused with the Nippon Budokan in central Tokyo, known largely as a performance venue for large rock and roll events. 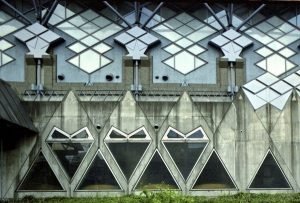 The Tokyo Budokan was designed by architect Kijō Rokkaku (1941- ). After graduating from the Tokyo University of Fine Arts and Music in 1965, he worked in the office of the internationally honored architect Arata Isozaki. Critical of much modern architecture and preferring a more intuitive approach to design, Rokkaku opened his own office in Tokyo in 1969. He was inspired by what has been called "pre-modern rituals" such as geomancy, which, according to its followers, is the study of the energies of the earth and the cosmos. As with feng shui, the intent is to design in concert with these natural forces. 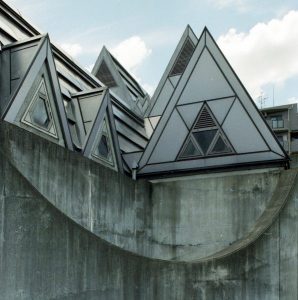 It has been said that in designing the Tokyo Budokan, Rokkaku's goal was to disseminate Japanese culture through a presentation of traditional Japanese martial arts programs. When seeing the exterior of the building, one is struck by the degree to which the diagonal motif appears (almost obsessively) in the massing, the fenestration, the roofing, and in countless construction details.

The effect is overwhelming and reads like a musical composition as much as a piece of modern architecture. The building is another confirmation that diagonality was a powerful 20th century design phenomenon sweeping the world. 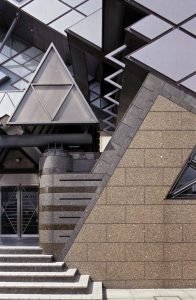 All four facades of the Tokyo Budokan look like miniature mountain-scapes and exuberantly and insistently express the diagonal motif. Rokkaku said he intended to reflect a human-made mountain that meets the sea and the sky. The way the prismatic architectural features seem momentarily frozen and suspended like ice crystals, combined with how sunlight flashes off the angled panes of glass seems to contribute to the architect’s desire to capture the moment of “readiness for movement,” so important in the martial arts.