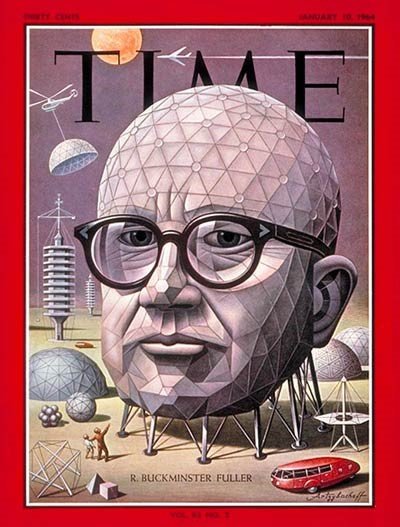 
R. Buckminster Fuller (1895-1983) was an American architect, systems theorist, author, designer, inventor, and futurist. When and where he grew up are clues to the man he became and to the unorthodox ideas he developed throughout his long and productive life.

Fuller was born and grew up in Milton, Massachusetts, an affluent suburb south of Boston. He spent many summers sailing off Maine's coast. Back then, ships—even large ships—had masts, sails, and rigging. The wood compression system (masts and yards) was held in place by ropes, cables, and chains. To the eyes of a sailor, these were just parts of a ship that helped to catch the wind and achieve propulsion. To a deep thinker like Fuller, these systems of struts and guys held hidden meaning and promising potential. That may not have dawned on Fuller at the time. Perhaps it surfaced later, as sources of inspiration for creative people often do, but the ships' parts and the forces acting on them were in his bloodstream. It would only be a matter of time before he could draw upon these inspirational structural elements and turn the principles into inventive new use.

Beginning around the middle of the 19th century, hundreds of octagon-shaped houses were built in the United States. They were part of the Octagon Fad sparked by the writings of Orson Fowler. Fuller would likely have seen some in Maine. One can't help wondering what impact they may have had on him, given that his mind was so attuned to geometry. One may also wonder if Fuller, when he was developing his geodesic domes, knew about Alexander Graham Bell's kites. Fuller said he didn't, but Fuller also failed to credit the sculptor Kenneth Snelson for the invention of what Fuller came to call the tensegrity principle, central to his engineering ideas.

Perhaps we can take Fuller at his word when he said he was astonished to learn about the tetrahedral cell kites that Bell had been developing on Beinn Breah, Nova Scotia. This could be so because we are all bombarded with news stories that we can so easily forget soon after reading them. Fuller did have the opportunity to go through Bell's notes at the National Geographic Society in Washington. He learned that Bell had been experimenting with kites with the goal of making stronger airplane wings. Bell explored what Fuller referred to as omni-triangulation. Fuller called it the octahedron-tetrahedron truss, and said that he had been immersed in his own investigations when someone asked, "Didn't you know Alexander Graham Bell did it?" 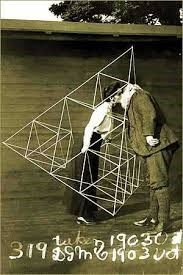 When Dorothy Harley Eber interviewed Buckminster Fuller on the telephone in 1978, he explained how he saw the connections between tetrahedrons, geodesic domes, and the ways atoms are packed. "I didn't learn about Bell until after the geodesic dome, and the geodesic dome comes quite a long time after what I call the synergetic mathematics -- the way the spheres of unit radius close-pack. You just take two spheres and they just touch one another 00 that's all. You nest a third one down between the two and you get a triangle. Then you nest another on top and you get a tetrahedron. If now you take two triangular sets of three unit-radius spheres and nest one on top of the other, you will make an octahedron unit. If you finally make two layers of spheres in closest packing, the spheres are the vertexes of the octahedron-tetrahedron truss. Many such closest-packed, unit-radius sphere layers, nested upon one another, produce the vertexes of what is known in physics as the 'isotropic vector matrix.' I've discovered it is the way atoms are packing. So it seems to be fundamental to nature." 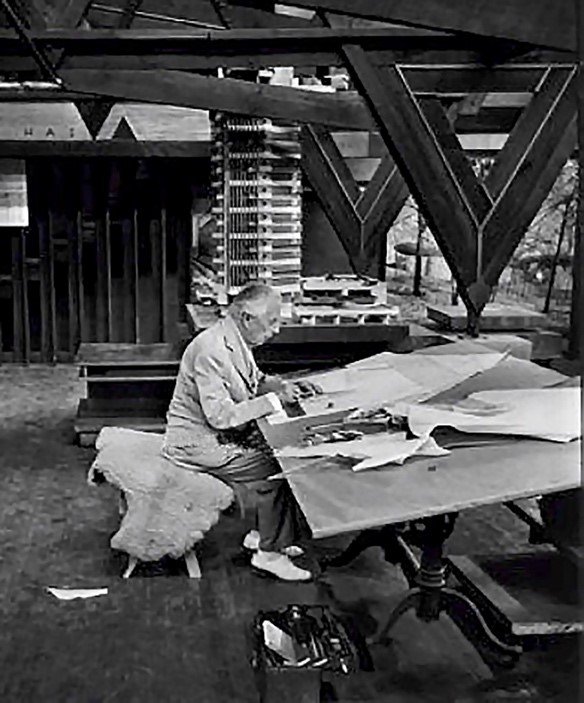 The way Fuller came to discover this triangulated method of joining structural members echoes Frank Lloyd Wright's discovery of geometry using the Froebel toys. Fuller was very likely exposed to these toys in his "Froebelian Kindergarten" (Froebel had coined the word Kindergarten). "My first objective structural experimenting occurred in my pre-eyeglass, blurred-vision, 1899 kindergarten," wrote Fuller. "The teacher gave us equilength toothpicks and semidried peas. She told us to make structures -- houses. All the other children, none of whom had eye trouble, put together rectilinear box houses. The peas were strong enough to act as angle-holding gussets. Not having visualized the rectilinearity about me, I used only my tactile sense. My finger muscles found that only the triangle had a natural shape-holding capability. I therefore felt my way into producing an octahedron-tetrahedron truss assembly. I, of course, knew naught of such names.

"I can remember the teacher, Miss Williams, asking other teachers to come and look at the strange structure I had produced. Fifty years later I heard from that teacher, who clearly remembered that strange event."