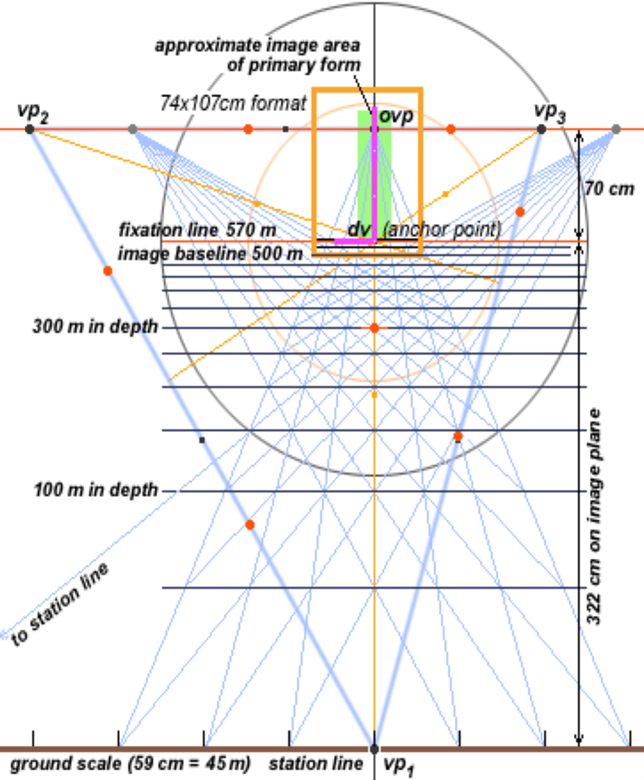 Samuel Y. Edgerton, Jr. was a professor of art history at Williams College and was a member of the Institute for Advanced Study in Princeton, NJ. His major written work is The Renaissance Rediscovery of Linear Perspective, 1975. Between 1955 and 1957, he taught art history at Perkiomen Preparatory School in Pennsburg, PA. One of his students was Joel Levinson, founder of the Daring Diagonal Virtual Museum. Levinson reconnected with his teacher around 2015 and they exchanged emails concerning Levinson’s research into Diagonality. The following email is from Edgerton to Levinson on the convergence of their investigations.

Dear Joel: My apologies (for the usual reasons) for the late reply to your most interesting letter. My wife, Dottie, and I loved surfing your web-site and all those beautiful buildings you've created! I can't wait to see the new academic center you're going to design for dear old Perkiomen.

I was also quite fascinated to read about your theory of "diagonality," and to inform you how remarkably it links to what has been much of my own life work during the past fifty years. I don't know if you have ever come into contact with my several works - two books and a dozen or so articles - on the history and cultural implications of linear perspective, from its inception as a device for Italian Renaissance painters to its application as a tool of modern science - herewith is a copy of my CV which if you can wade through the pomposity will at least show you where I've been and where I'm going during all those decades since we last were associated.

Anyway, why Renaissance perspective may be important to your theory is that it was all about PERPENDICULARITY!! The reasons had to do with ancient Greek (Euclidian), Arab, and medieval optical theory, based on the notion of the geometric "visual pyramid" and the primacy of the *axis perpendicularis," the "visual ray" that supposedly traveled from the center of (making right angles with) the object seen and the center of the eye, thus "certifying" the object most distinctly as "seen" in the cognitive center of the brain.

Not only was such perpendicular vision understood as the most certain, but it had a moral dimension as well. Medieval Christian theologians were convinced that God's divine grace could also only enter the human soul at right angles (the eye was their model for this), but if the soul were stained with sin (like a cataracted eye), those righteous perpendicular rays of God's grace could not enter and would be reflected or refracted away. Also, they believed (as we still do today) that you recognize an honest man because he looks you "straight in the eye"; that is, so "truth" can pass perpendicularly between you and him. However, if you encounter someone who gives you a sideways (diagonal?) look, you should judge that his "truth" is being reflected from you and that he should not be trusted!

All this is to suggest that your "diagonality" may well be a cultural reaction to medieval/Renaissance "perpendicularity" and all of its theological constringencies [sic]. "Diagonality" seems indeed to reflect a kind of evolutionary "in yo'face" attitude regarding the moral restraints of Western Civilization itself; sort of like an architectural variant of wearing one's baseball cap backward. What do you think?

Before you tackle any of my writings, please read David Lindberg's THEORIES OF VISION FROM AL-KINDI TO KEPLER, U of Chicago Press, 1976, then my RENAISSANCE REDISCOVERY OF LINEAR PERSPECTIVE, Harper & Row Basic Books, 1976.

Actually and coincidentally, I'm at work at this very moment on a new book about this very matter! Sam

Pentagons in Medieval Sources and Architecture

Even though the problem of the regular pentagon construction had been solved in Euclid’s Elements, it seems to have been neglected in the practical work of architects in the Middle Ages, even though it was known among masters of the liberal arts. Searching for new construction methods consumed enormous intellectual power and produced various methods of varying accuracy. The reason for their appearance could be either a quest for a simple method convenient for practical use or the characteristics of certain tasks in architecture. This is one of the most beautiful examples from cultural history where creative geometrical thinking appeared in the works of architects rather than mathematicians.

It can be seen that pentagons were not uncommon in medieval design. Half decagonal apses, pentagonal traceries, and even design details were related to geometric methods based on the construction of a regular pentagon. It is plausible that this figure, besides the obvious square and triangle, was also used in plan design of monumental constructions such as the cathedrals of Reims and Saint Quentin.