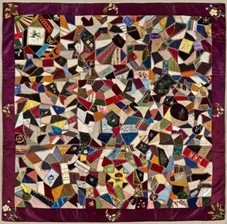 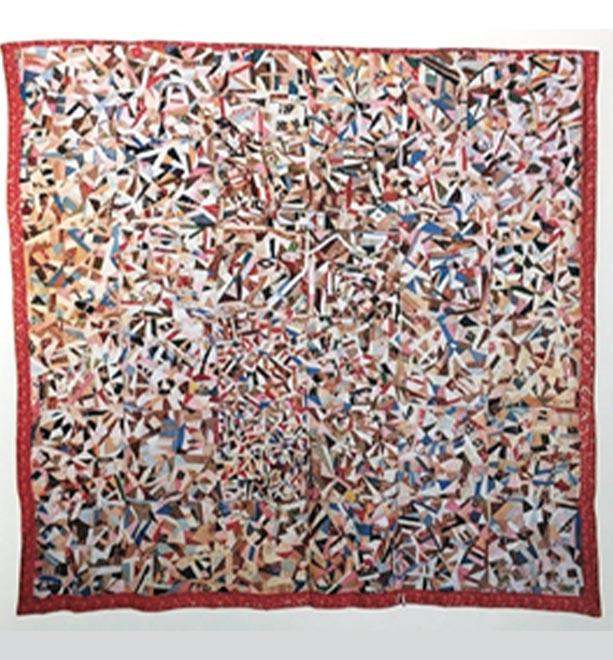 In 1816, Sir David Brewster (1781-1868), a Scottish clergyman-turned-scientist, applied for a patent on a glass arrangement in a metal tube—what today we call a kaleidoscope. Although something went wrong with his legal registration, by 1830 hundreds of thousands of kaleidoscopes were fabricated and sold, creating what Cindy Brick calls “a mania … for their colorful, fractured interiors [which] influenced styles in dishes, stained glass, and other expressions of decoration.” 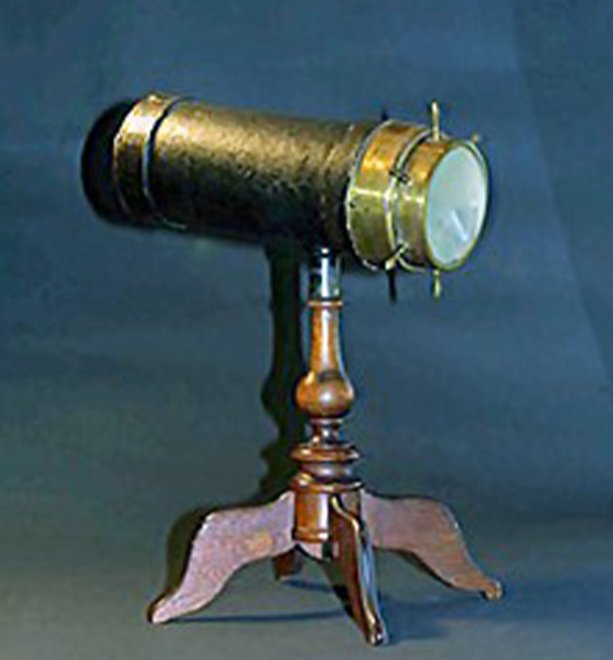 The influential effect of kaleidoscopes cannot be overestimated. In 1819 it cost a penny to peek into a large kaleidoscope, many of which were set up on street corners throughout London. It has been reported that in Britain alone, two-hundred thousand were bought in the first three months of its manufacture. Those coming from wealth bought luxury versions of the device. One magazine of the time claimed that kids kept walking into walls, so enthralled were they by the intricate, radiating, churning images created by Brewster’s invention. A correspondent for the Quarterly Journal of Science and the Arts, published by the Royal Institution wrote, “A universal mania for the instruments seized all classes … and every person not only felt but expressed the feeling, that a new pleasure had been added to their existence.”

Kaleidoscopes enchanted viewers throughout Europe and in America during the rest of the nineteenth century, and indeed into modern times. Viewers were mesmerized by the tumbling fractured images they saw when they peered into and turned the magical tube. 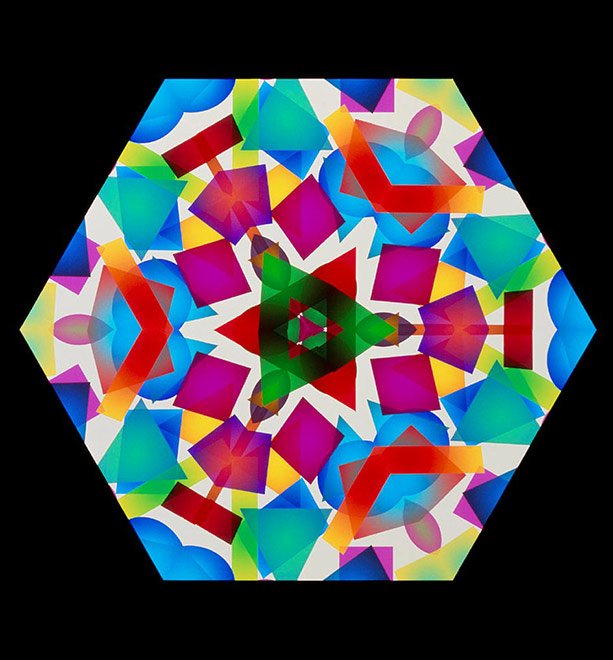 Two years after Brewster invented the kaleidoscope, an English weekly began to be printed (1818 through 1831), starting originally as a folio of one page, then two years later turning into an eight-page folio. An article in Wikipedia reports “It consisted of slight original and selected articles in literature, science and art, and aimed at that happy combination of instruction and amusement which has since been more elaborately developed in still cheaper serials.”

In 1847, Charles Busch (1825-1900) emigrated from Prussia to the United States. He had a successful rope-making business and used microscopes to examine the fibers of his ropes. As a microscopist, he served for a short time as an assistant to Professor Louis Agassiz, which then led him to study telescopes and kaleidoscopes. Eventually, in 1870. he gave up rope-making and turned to manufacturing parlor kaleidoscopes, making them by the thousands. Reportedly, their quality was superb. When he moved to Claremont, New Hampshire in 1875, he set up a little room in his house and manufactured 5,000 more units working with his daughter.

In a March 19, 2019 posting on ETSY, Abigail Cain quotes Helen Groth, a University of New South Wales professor whose work focuses on Victorian literature and visual culture: “Unlike the specialization of science now, in the 19th century, there was this idea of instructive entertainment, of making scientific ideas and inventions accessible. That’s where the kaleidoscope comes from. … One of the things that’s really striking about the history of the kaleidoscope is that it’s the only device of its kind that’s still in constant production.”

Although only one crazy quilt bears the name “Kaleidoscope,” it can be reasonably presumed that this novel fractured and fragmented radial rendering of the gadget influenced many quilt designers from the moment it came on the market. 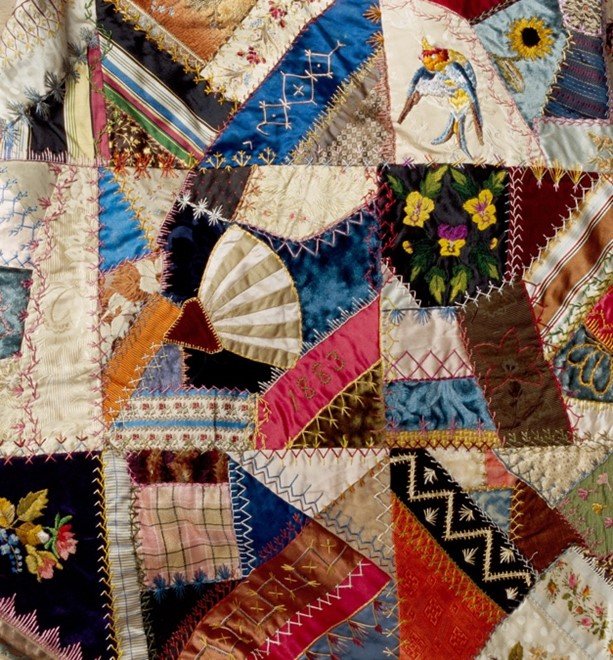 Although the Victorian Crazy Quilt fad is said to have begun in 1880, the use of irregular fragments started years earlier, the patchwork quilt called “Kaleidoscope” having been made in 1839, a date that is sewn into the fragile quilt on the backing fabric (some experts raise questions about the exact year). The quilt is made of forty-two patchwork squares, the pattern of which is almost impossible to discern because of the seeming randomness of the arrangement. Cindy Brick, the author of Crazy Quilts, states that the name “Kaleidoscope” was given the quilt by the family that made it. 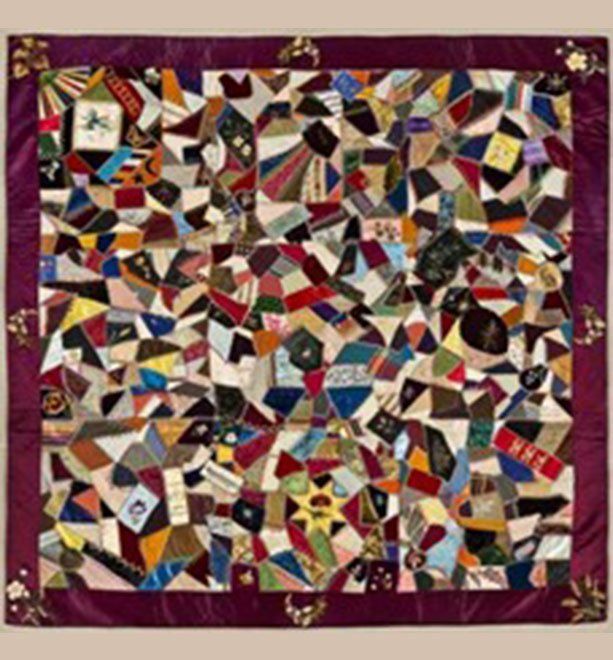 It is tempting to speculate that the Tyson family had acquired an actual kaleidoscope and that the crazy mesmerizing jumble of colorful fragments had indeed influenced the then-daring layout of this quilt. 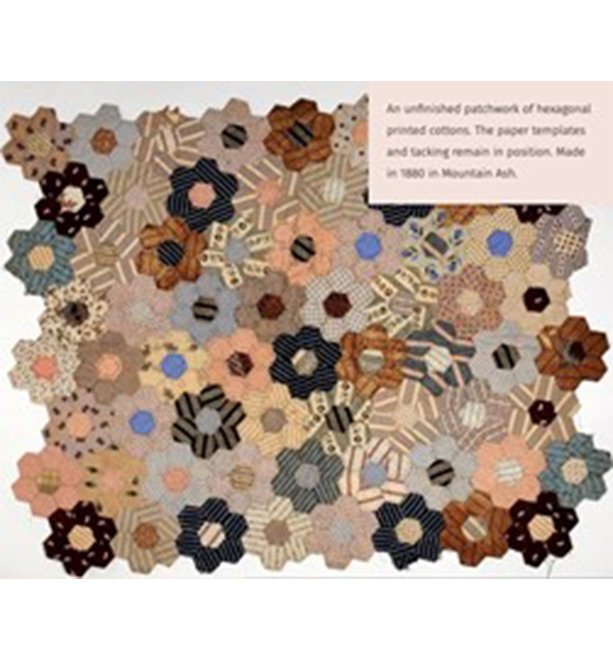 As the example below illustrates, not all quilts that have a diagonal pattern or rotated squares fall into the category of Crazy Quilts. Although appealing on any bed and made with extreme care, this pattern lacks the random asymmetry that characterizes those that rightly can be called Crazy Quilts. 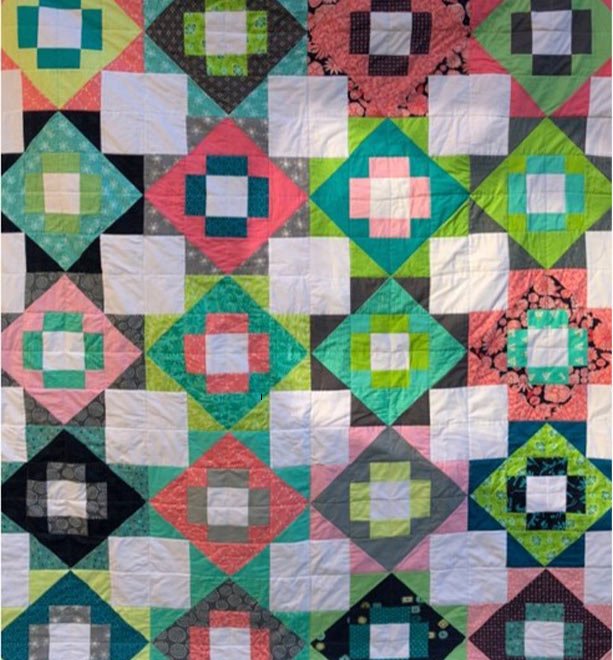