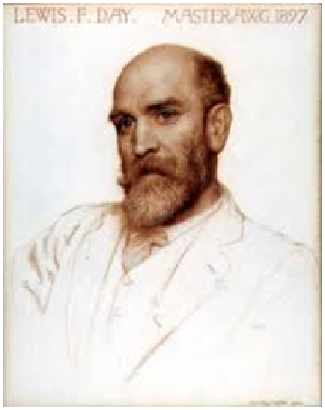 Lewis F. Day (1845-1910) was a British decorative artist, industrial designer, writer, and critic who was at the center of contemporary applied arts in Britain. He had professional associations with William Morris, Christopher Dresser, and other key figures in the Arts and Crafts movement. He converted his Cantor Lectures on Ornamental Design into several books that informed readers of decorative patterns from diverse sources such as the then-popular Japonism. These patterns covered a wide range of styles but noteworthy are geometric patterns that involved diagonal relationships. This is critical because when Day’s books came on the market, it was at a time when diagonality, as a design motif in the modern sense of the word, was just about to emerge.

Although no certain linkage is evident yet, and while the diagonal motif was not the only kind of geometric pattern that Day promulgated, one can imagine that Day’s pattern books, with images of diagonal motifs and diaper patterns likely influenced Frank Lloyd Wright. Wright loved Japonism and was always open to outside inspiration but was loathe to acknowledge it.

Related Galleries: THE AGE OF PROGRESS