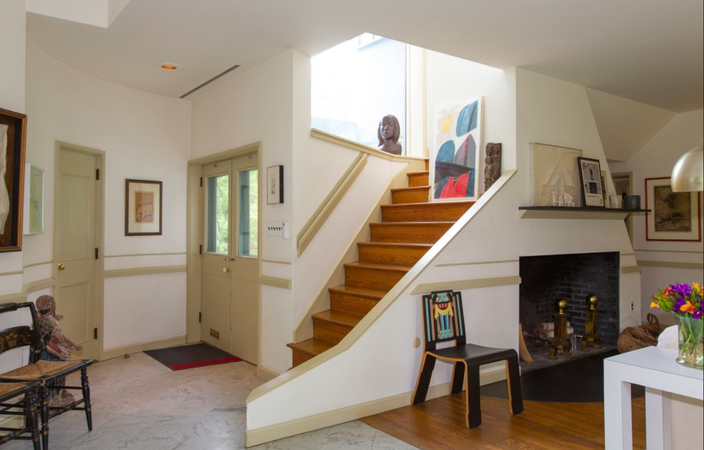 The Vanna Venturi house in the northwest corner of Philadelphia is a Postmodern work by architect Robert Venturi that some have regarded as one of the “10 Buildings That Changed America.” It received the 25-Year Award from the American Institute of Architects. The focus of the house, which Venturi built for his mother, is a quirky stair to a second-floor bedroom. The stair (which slides by a large window) in combination with the fireplace, around which the stair wraps, is an iconic expression of Diagonality.

Whichever way one may look at the stair, the diagonal motif and its concomitant asymmetry is not just evident, but dramatically and ingeniously expressed.

As Venturi wrote in his 1966 manifesto Complexity and Contradiction in Architecture, “Architects can no longer afford to be intimidated by the puritanically moral language of orthodox Modern architecture. …I am for messy vitality over obvious unity.” 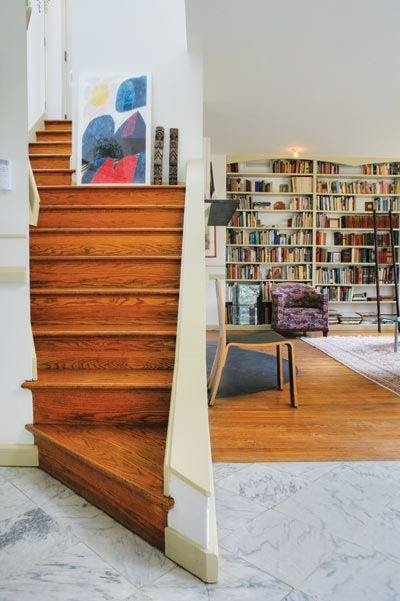 The stair pays homage to many features at Fonthill, a concrete, multi-level, one-of-a-kind house built by Dr. Henry Chapman Mercer for himself in Doylestown, PA. Mercer was an American archaeologist and tile maker with a fabulous talent for original and memorable architectural works that include his own home and his tile works on the same property, and a multi-story museum in Doylestown. It is not an overstatement to say that probably every architect in the Philadelphia area has visited Mercer’s concrete extravaganza modelled after rooms Mercer saw in European castles. 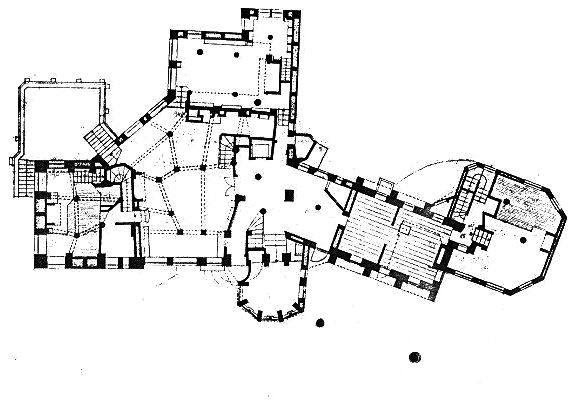 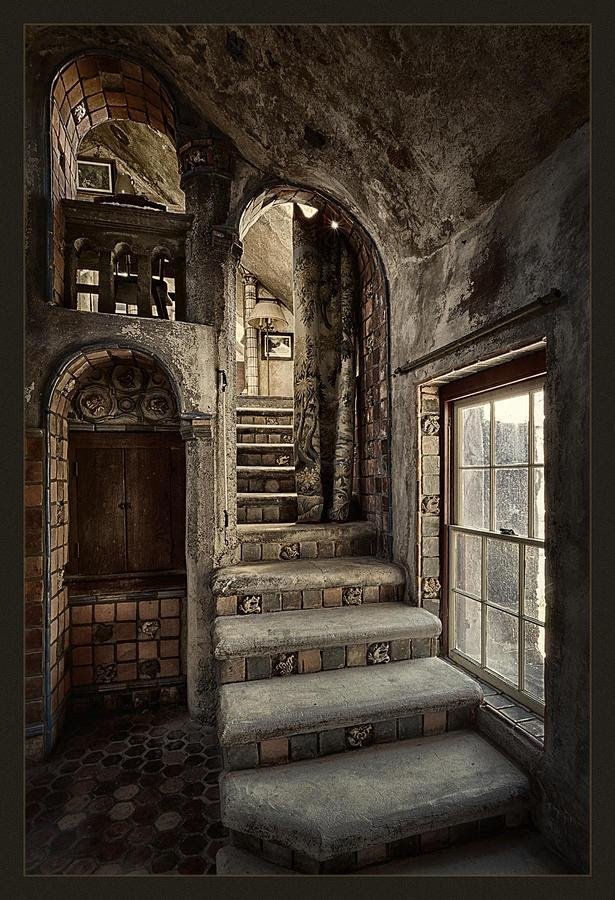 The plan view of the first floor of the Vanna Venturi House (below) reveals Bob Venturi’s passionate embrace of the diagonal motif. The plan is almost a fugue between the orthogonal right angle and the whimsy of the oblique. But there are risks in introducing whimsy in a place where functionality should prevail. Tragically, Vanna Venturi tripped on the leading triangular projection of the stair and broke her hip. 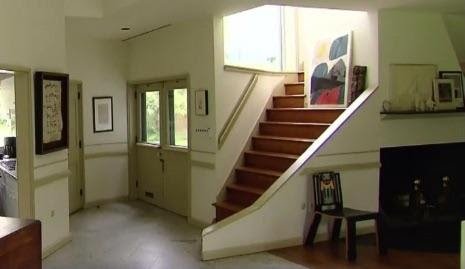 Joel Levinson, founder of the Daring Diagonal Virtual Museum, was a student of Robert Venturi at the University of Pennsylvania (1957-1963). Soon after graduating from Penn in 1964, Levinson toured the Vanna Venturi house with his former professor. The house had just been finished but Venturi’s mother had not yet moved in. At the time, Levinson was just beginning to formulate his theory of Diagonality, and here was living evidence of the theme’s manifestation. In Levinson’s second year at Penn, Venturi was working on his book Complexity and Contradiction in Architecture. He mentioned the notion of diagonality in his book but did not recognize it as a global and historical phenomenon.

An assignment Venturi gave his students at the time was to design a grammar school. Levinson came up with a triangular arrangement of three-story wings united at ground-level by a skylighted common space. Above the common space was the schoolyard with projecting skylight enclosures serving as paired angular sculptural elements. The triangular arrow-shaped elements at the end of each wing were not originally triangular; they were typically rectangular shafts. The final triangular shape of the stair towers was Venturi's suggestion. He suggested the triangular form because it better knitted the end of one school wing with the one meeting it at an angle. 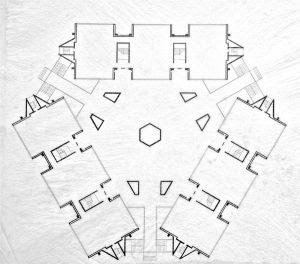 The tapered terminations at the ends of the wings of the elementary school appear to have been inspired by a contemporary project by architect Gio Ponti in Milan. Venturi must have been aware of Gio Ponti’s and Pier Luigi Nervi’s Pirelli Building under construction in Milan in 1956 and completed in 1958. In 1956, Venturi was just starting a fellowship in Rome. The lens-shaped, 34 story tower is terminated at both ends with arrow-head shaped utility shafts, exactly like those Venturi had recommended for Levinson’s grammar school project.

Robert Venturi explored the diagonal motif in many projects after his Mother’s House. These included a beach house at the Atlantic shore designed in 1959 and the somewhat cartoonish Abrams house outside of Pittsburgh, designed in 1979. 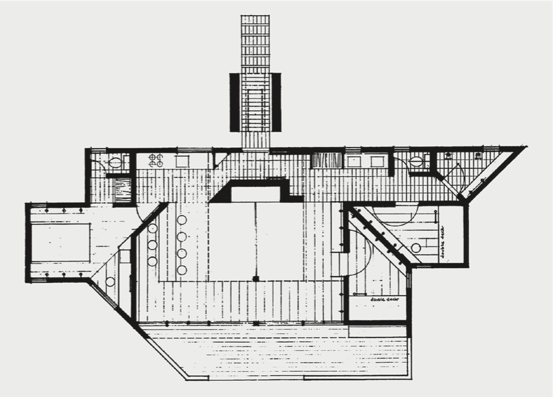 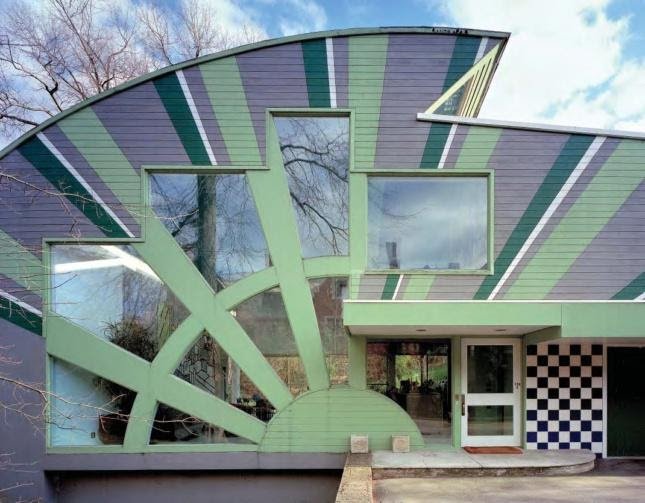