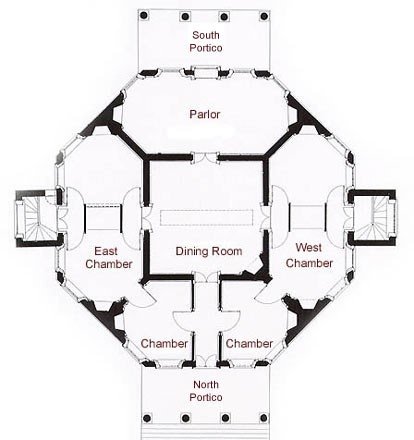 In 1823, 80-year-old Thomas Jefferson made his final visit to Poplar Forest in central Virginia. He had built the house as a secret escape from his then too-frequently-tourist-visited mansion at Monticello, ninety miles to the north. The three-day trip on horseback must have been a profoundly sad journey for Jefferson because this would be his last engagement with this little-known house that was so intimately tied to his abiding passion for the use of the octagon in architecture and furniture design. That eight-sided geometric figure had appeared in so many of the President’s designs that one could argue it contributed in no small way, decades later, to the emergence of the Era of Diagonality: first through what became known as Orson Fowler’s "Octagon Fad" in the middle of the nineteenth century, then, just before the start of the twentieth century, in the revolutionary work of Frank Lloyd Wright.

In 1800 (half a century before Fowler's work), during his second term as President, Jefferson was still looking for every opportunity to employ the octagon, in which he saw such beauty and utility. It was then he designed an octagonal house for his daughter Maria at Pantops, in Albemarle County, Virginia. Construction was started—then, very sadly, halted when Maria died unexpectedly in 1804. Roughly two years later, Jefferson dusted off the plan and used the octagonal scheme, mostly unaltered, for the design of Poplar Forest. It was only five years earlier that he had completed the octagonal dome over the heart of his beloved architectural experiment at Monticello.

Poplar Forest is a six-room, two-story house whose basic footprint is an octagon. Although the body of the house, exclusive of porches and two enclosed exterior stair towers, is a pure octagon, no rooms within the house, curiously enough, are themselves regular octagons (regular meaning all eight sides are of equal length and the corner angles are all equal). On the main level, a perimeter ring of four elongated octagons frames a square, windowless, two-story, sky-lighted dining room—a spectacular and memorable architectural space. The house is an elegant and elemental mosaic of spaces that is truly expressive of Jefferson’s discriminating and creative mind. As historian Hugh Howard observes in Thomas Jefferson: Architect (2003), “The house at Poplar Forest has the purity of a geometry lesson."

If no room in Poplar Forest is itself a regular octagon, one is apt to ask: Why did Jefferson fit all these non-octagonal and irregular-octagon spaces into an overall octagonal volume? Did Jefferson begin with that simple overarching octagonal form and then devise an elegant geometric solution to accommodate his required functional spaces? Or, did he begin doing space diagrams (what modern architects call bubble diagrams), which, as they evolved, naturally led him to the octagonal footprint? Or, did Jefferson steer the arrangement of rooms, subconsciously or consciously, in one evolutionary sketch after another, into the octagonal shape because that was a shape that was embedded in his geometric psyche? This is much the way non-orthogonal shapes are embedded in the psyches of architects during the Era of Diagonality.