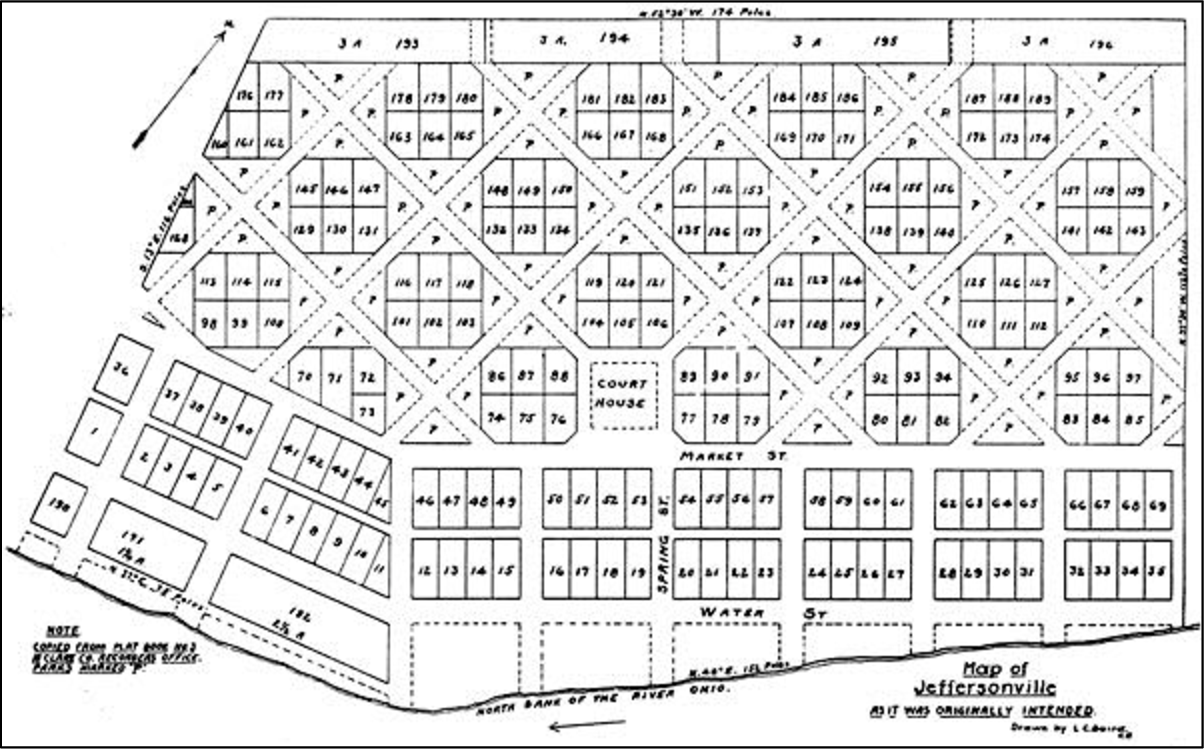 Even though Thomas Jefferson favored small towns over cities, he was keenly interested in city planning. Another interest was public health, particularly the potential negative effects of yellow fever on the westward growth of the nation. The President wanted to create a model Urban Plan [think the town, not city] for the American Frontier that was rational, elegant, and healthful. In 1800, he met with William Henry Harrison in Philadelphia and described his idea for a model city. This proposal was based upon a checkerboard pattern of developed residential blocks interspersed with planted, open spaces. This concept, likely influenced by the layout of Savannah, Georgia, was later described by Jefferson in a letter to Comte de Volnay in 1805that likened his plan to a chessboard:

“Let the black squares only be building squares, and the white ones be left open, in turf and trees. Every square of houses will be surrounded by four open squares, and every house will front on an open square. The atmosphere of such a town would be like that of the country, insusceptible of the miasmata [sic] which produce yellow fever.”

When Harrison returned to Indiana as it's Territorial Governor in 1801, he began to implement Jefferson’s idea for a site in Indiana on the Ohio River opposite Louisville, Kentucky. Harrison’s proposed layout involved streets diagonally disposed to the orthogonal grid of the building lot property lines. The diagonal streets were likely not suggested by Jefferson for reasons set forth below. Harrison’s scheme with the diagonal streets was likely drawn by attorney John Gwathmey. Gwathmey had married a relative of IsaacBowman, who originally owned the land that became Jeffersonville. Gwathmey, along with others, represented Bowman’s interests in selling building lots and Jeffersonville became one of the most important towns in Indiana, becoming, in 1813-1814 the de facto capitol of the Indiana Territory.

In his August 6, 1802 letter to Jefferson, Harrison writes that the proprietors of the town had

“acceded to my proposals [and] a Town has been laid out with each alternate square to remain vacant forever . . . and I have taken the liberty to call it Jeffersonville.”

Jefferson had been opposed to Pierre L’Enfant’s Baroque plan for Washington, D.C.with its many diagonal boulevards, much preferring the gridiron scheme that William Penn devised for Philadelphia. 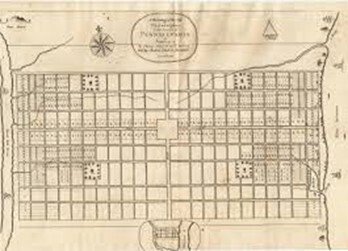 Philadelphia had been the capital of the nation, and Jefferson knew it well. The orderliness of the graph-paper-like scheme appealed to Jefferson’s sense of order and practicality. Philadelphia contained five open squares to provide green spaces that could reduce the spread of diseases like yellow fever and it had a central square that was the visual focus of the community. Jeffersonville, as originally drafted, did not have a town square but one was later represented by a piece of paper glued [see plan below] over two streets crossing diagonally. The town square was obviously an afterthought and/or an amendment in accordance with Jefferson’s knowledge of Penn’s plan. 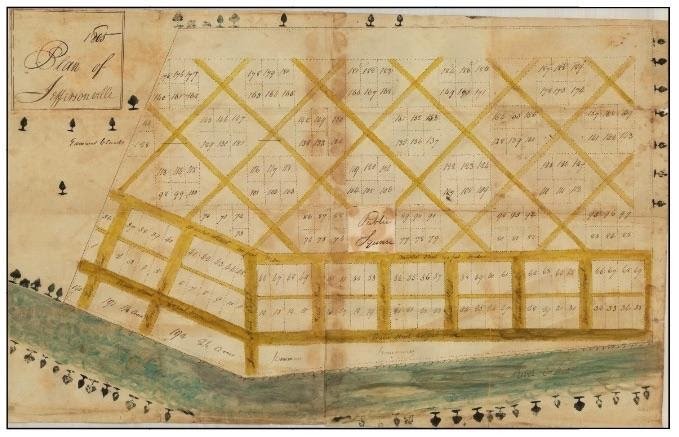 The scheme is quite subtle, and it is easy to overlook how Harrison and Gwathmey wove together the checkerboard scheme of alternating open green spaces that are cut through diagonally by the streets with the diagonally-rotated disposition of the building lots. The diagonal motif becomes apparent in the way the streets cut through the park areas,leaving triangular planting areas. The motif is also evident in the way the diagonal portion of the plan relates to the orthogonal layout of streets and building lots along the river. In 1803, Harrison wrote to Jefferson saying,

“The streets of the town of Jeffersonville are made to pass diagonally through the Squares and are not parallels [sic] with them as I knew to be your intention —but the proprietor[presumably Isaac [sic] Bowman]was so parsimonious that he would not suffer it to be laid out in that manner.”

By 1816 the checkerboard plan with the diagonal street pattern proved unworkable. It was replotted in 1817 by order of the Indiana Legislature. In 1836, another effort was made to use the gridiron scheme that had been proposed by Jefferson. This may or may not have had the diagonal street pattern. Whatever the scheme, this effort was also rejected by the town council.

The problem with a diagonal street pattern is that streets are used by people and vehicles in motion. People or vehicles driven by people are objects in motion and the easiest navigation is achieved by the tried-and-true gridiron, checkerboard street system. But as Jefferson once noted, the gridiron can become boring even though it is eminently navigable. The occasional diagonal thoroughfare is sometimes used with great success as in the Benjamin Franklin Parkway that connects the Philadelphia Art Museum with City Hall situated in the fifth square in center city Philadelphia.

Proposed plan for what is now called the Benjamin Franklin Parkway
Jacques Gréber, 1917