It was by chance that DDVM founder Joel Levinson met a demure, pregnant artist, Jean Davies Nordlund, at the Philadelphia Craft Show in Philadelphia in 1980. Levinson’s architectural firm, Levinson Lebowitz Zaprauskis, was designing its first office building for the University City Science Center in Philadelphia. Stephen Lebowitz designed the building’s exterior and Joel Levinson designed the lobby. The Philadelphia Redevelopment Authority required that 1% of the construction budget be used for a work of art. Because it made sense on this site to locate the elevators at the back of the building, Levinson came up with a scheme to make the route from the building’s entrance doors to the elevators a pleasant, memorable experience. This involved creating curved walls 30 feet long and 10 feet high on which artwork would be installed. The firm commissioned Jean Nordlund to create tapestries that would be applied to the curved surfaces. 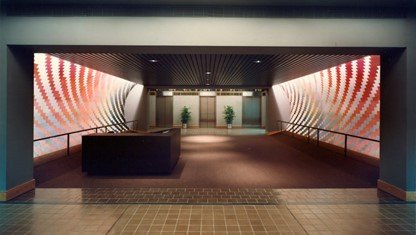 An orthogonal pattern on the tapestries would have created a static impression, while diagonals implied movement, appropriate for a zone in the building that was meant to be passed through, not to linger in.

The Science Center project was not Jean Nordlund’s only tapestry that involved a diagonal motif. Below are some of her other remarkable creations. 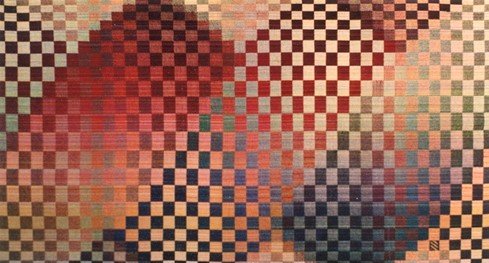 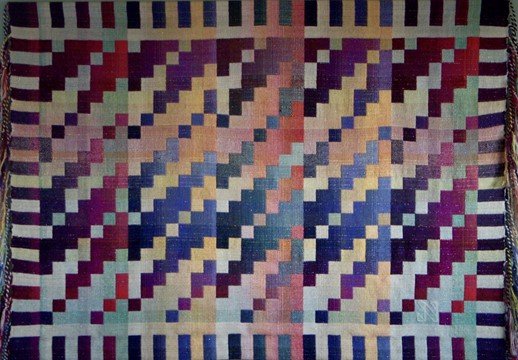 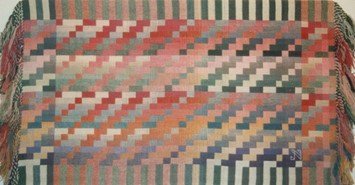 Here is Jean Nordlund’s recollection of how and why the diagonal motif entered her work.

“As a child, I was one of three daughters of an artist and all of us spent time drawing, painting, and making pottery. However, I discovered when I was thirteen that my favorite subject, unlike the rest of my family, was geometry. And when I entered graduate school in art and design, I discovered weaving where its inherent geometric nature offered a way to fuse those interests from my past. My double-woven textiles are designed on a grid of threads manipulated as blocks. Using these blocks on the diagonal provides a slope for color to move dynamically. As opposed to checkerboard effects, figure and ground fluctuate fluidly as color gradations slide across the surface, creating a trail for a contemplative visual journey. Variations in block size create curvilinear and spatial illusions, expressionistic color play by a left-handed artist.” 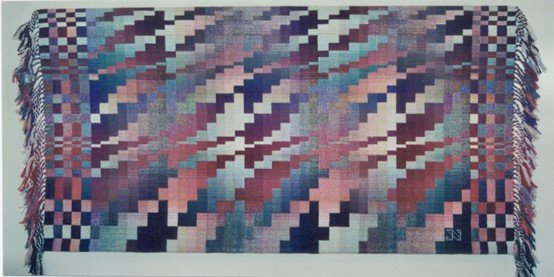 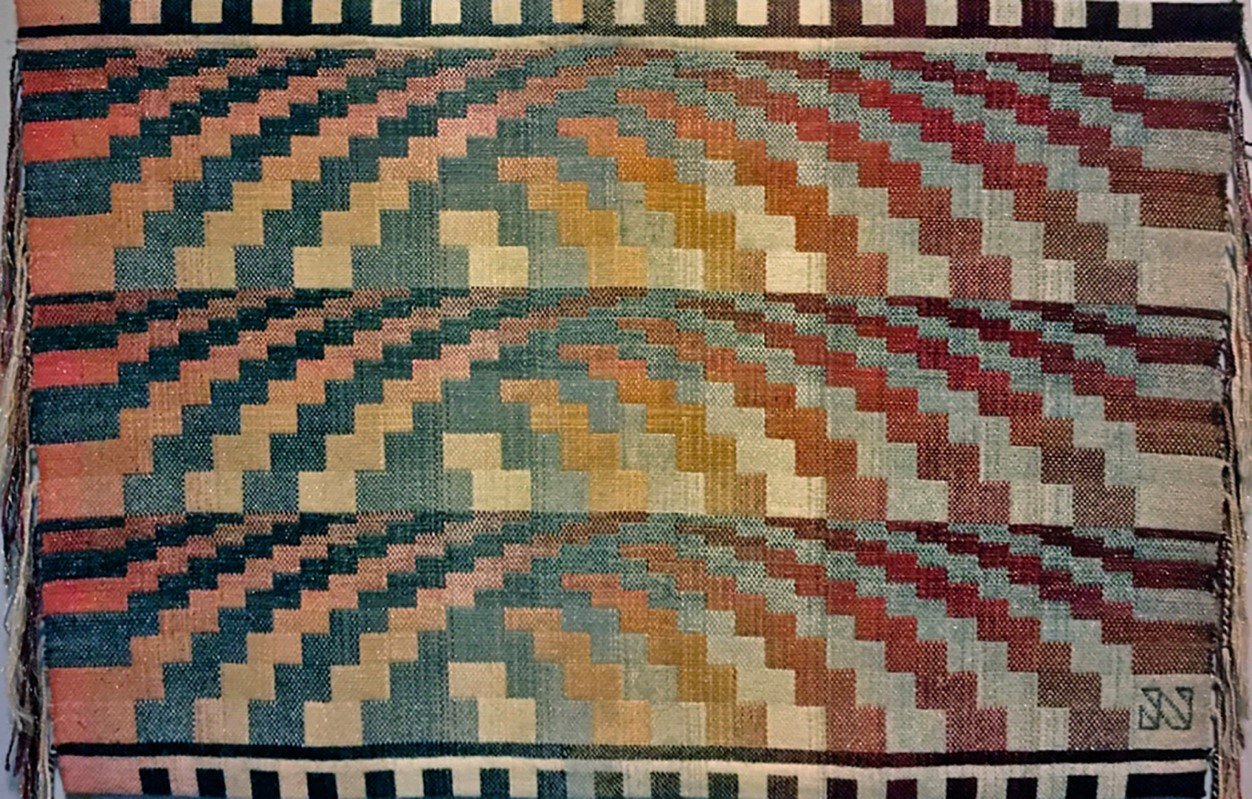 All of Nordlund’s other tapestries are handwoven on a loom. This was not possible at the Science Center, because of the size of the installation. Nordlund submitted a roughly 2.5’ x 5’ hand-woven sample that was enthusiastically approved. Then a consultant was brought in from the Philadelphia College of Textiles and Science to convert her design into countless punch cards that directed a Jacquard loom to mechanically weave the tapestries. Obviously, this installation would not have been possible before the age of computers. Finally, the 30’ x 5’ tapestries had to be glued to the curved walls, no small feat. Two tapestries were required for each wall, one above the other (4 in all).

In March 1981 architect Joel Levinson called to discuss my interest in weaving two 10' x 26' textiles for the lobby of the University City Science Center at 3440 Market Street in Philadelphia, a space he designed. The weavings would cover the concave side walls of a lobby with a relatively low 10-foot ceiling. The intent was for the low ceiling with convex sidewalls would to make you feel that you were entering a tunnel, vibrant with color and movement.

I was hesitant to accept this commission as I’d just given birth to our second child, and the textiles were to be completed in six months. However, my supportive husband encouraged me to accept and the architect suggested that I design the weaving and have it woven at one of the active mills in Philadelphia, where I was told they could weave them in 3 days. Dubiously I signed a 20-page contract, betting against what I'd always believed, that my designs could not be woven on a commercial loom.

While I dyed many of the yarns for the project, many of the colors were ordered from Harrisville Design in PA and Filature Lemieux in Quebec. Delays arose when a Canadian postal strike stopped those yarns at the border for a month. Further complications arose after I wove and shipped a scale model of the piece to the Craftex Mill in Philadelphia. Yes, they could weave the textiles in a couple of days, or perhaps hours, but it would have to be all white! Looms at the mill were always warped in white yarns, but I was asking for a warp with a gradation of 40 different colors. The mill also wove all textiles on a jacquard loom with 18-inch repeats of the weft (or cross threads), but my deceptively simple design had no repeats. Rather than a project of a couple of days, one of the looms at the mill had to be taken out of fabric production for the month and dedicated to this single piece.

The jacquard looms at the mill were programmed with punched cardboard cards, similar to those old 3 x 8-inch IBM cards with small rectangular holes used in early computer work. Similar to those IBM cards, but larger, the cards used in this project were bound together in order of use and piled above the loom. The cards for this project filled an entire 10’ x 10’ x 10’ cube, some 1,000 cubic feet of jacquard punch cards!

Further complications arose! Within days of beginning my project, the weavers at the mill soon went on strike. To help keep this special project moving along, an older master weaver was brought out of retirement which required slipping him into the mill after dark to work quietly through the night on my piece. He worked nights for three weeks, stopping the loom every few inches to make the color changes.

But the complications were not over! To attach the textiles to the curved concave walls, a latex backing had to be applied (by Keisling and Hess Upholstery Service) to the weavings so that they could be glued to the walls. As the latex dried, each of the weavings shrank far more than expected, leaving them too short to cover the walls. I got an urgent phone call from the architect who asked, “What do we do now?” I calmly reassured him that the loom had been warped with sufficient length to weave the textiles twice in the event of a pattern error.

Eventually the textiles were rewoven, backed, and installed (by EPI) in the lobby of the Science Center, brilliant beams of color depicting the gradual transition of the seasons and named “Summer Solstice/Winter Solstice.”