Perhaps as frequently as once a week, a new topic

will be exhibited in the Changing Exhibits gallery #1.10. 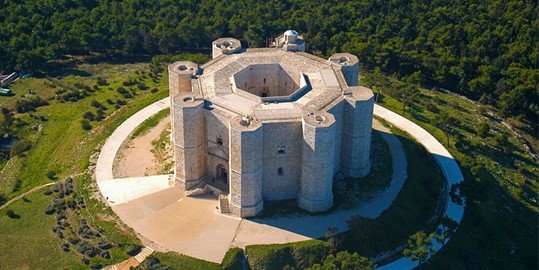 It’s a toss-up as to which is more fascinating: the building or the colorful guy who created it? Is it the 85-feet high, two-story 13th century building with its pure, simple, but not-from-all-perspectives obvious octagon-based geometry? Or is it the man who built the Castel del Monte: Holy Roman Emperor Frederick the Great (1194-1250) of the Hohenstaufen dynasty. He was at different times the King of Sicily (crowned at the age of four); and, the King of Germany, receiving the imperial crown in Charlemagne’s 8th century octagonal basilica in Aachen, Germany; and the King of Burgundy; and…if he wasn’t busy enough with all those titles and responsibilities, the King of Jerusalem.

Let’s begin with the building, then present a condensed portrait of Fredrick the Great, then return to the building, whose apparent simplicity belies endless geometric and historical complexity. The structure, alternatively referred to as a fortress, castle, and hunting lodge, is now a UNESCO World Heritage Site. The simple masonry mass with its eight octagonal stair towers is a fusion of Gothic, Romanesque, and Norman architectural styles with undercurrents of richly geometric Islamic architecture. Its geometric roots may even extend back to the octagonal Greek, Tower of the Winds, built in relatively nearby Athens in 42 BC and also to the Dome of the Rock in Jerusalem built in the 7th century AD.

According to some accounts, the Castel was built as a two-story hunting lodge enjoying a commanding presence atop a low rise. Other accounts describe it as a fort; perhaps it was both. As a fort, it is a departure from the rectangular forms of the Roman castra (a military encampment) and is unlike the central European fortresses of that time, which were irregular complexes sprawled in an irregular landscape. It is said that the Castel del Monte owes its geometry to more geometrically ordered Islamic prototypes, which in turn owe much to Pythagorean principles that focused on the diagonals of squares. 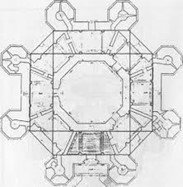 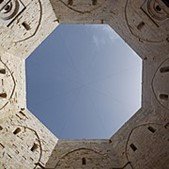 The Castel del Monte, ‘crown of Apulia’, consists of a central two-story, hollow octagonal tower with eight subsidiary stair towers at the exterior corners. The central tower has a band of rooms surrounding an open-air, interior octagonal court that was likely filled with plants and a fountain similar to many impluvium-like courts built since the Roman era. The ring of rooms are separated, one from the other, by walls whose position in the floor plan aligns with imagined radials originating from the implied center of the court. These radials connect the vertices of the interior and exterior faces of the tower.

Although the Castel del Monte reflects the characteristics of Hohenstaufen architecture at the end of Frederick’s reign as emperor, it has been said that this building is unique, an apotheosis of what Frederick had been trying to achieve. In his book devoted to the Castel del Monte, author Heinz Götze writes,“…there is no fortress and no castle belonging to the period of the Middle Ages in Europe that could be regarded as a forerunner of this building concept… Nothing about it is a groping attempt, nothing is preliminary; rather, every aspect appears in itself to be consistent and consummate. Where did this collection of form originate?” Götze goes on to state that “forms and design principles of Hohenstaufen buildings have their roots in the Byzantine, but especially in the Arab-Islamic world and its mathematical-geometric tradition.”

Frederick II’s rebellious character, his interest in the sciences, his conflicts with the popes astonish even today’s historians. At the age of 3, he was anointed king of Sicily, then spent his youth in Palermo, where he came into contact with many cultures and scholars. When he took over government affairs at the age of 14, he was fluent in Italian, German, Latin and Arabic. Then he traveled to Germany to be crowned king. He owed his enthronement as emperor of the Holy Roman Empire to his extraordinary negotiating skills with princes and popes. After becoming emperor, he returned to southern Italy, where he loved the landscape of Apulia. Frederick distinguished himself from other rulers of his time by inviting numerous scientists and artists to his court, where Jewish, Christian and oriental influences intermingled. He became a mastermind of enlightenment and tolerance and was benevolent even towards the archenemy Islam. With Christian popes, however, he did not avoid conflict. Viewing himself as the representative of God on earth, he refused any form of subordination. This led to his excommunication several times. Nevertheless, he joined the Fifth Crusade, which succeeded in regaining Jerusalem for Christianity. But this victory was not with military force. Instead, he used his knowledge of the Islamic world and negotiated a ten-year peace treaty with the sultans.

According to an Islamic chronicler, Frederick was far from handsome; he had red hair, was beardless, and shortsighted. Calling himself ‘Lord of the World’, he was either praised as a wonder or reviled as anti-Christ, that is to say, one who, in Christian belief, represents on earth the powers of evil by opposing Christ, glorifying himself and causing many to leave the faith. In business, he was aggressive; his trading extended into Spain, Egypt and Morocco. He was also a gifted artist and a poet, supporting activities in science and philosophy with interests in medicine, mathematics, astrology and astronomy. Although Götze writes that Frederick “lived entirely according to Christian tradition…Frederick remained a continually questioning and doubting mind who did not accept the Church’s dictates about what to believe and how to think. An unquenchable thirst for knowledge drove him and inspired the most astonishing experiments, which reflect none of the prejudices of medieval thought…His bitter struggle against the Church’s claim to secular power nevertheless contributed considerably to the dissolution of the medieval world and thus to its emergence into modern times … The sense of reality became keener, and the beginnings of a new art and a new perception of nature became visible: beginnings of the world in which we live today.” After his death from dysentery, the Emperor was dressed in the robes of state then placed over Arabic garments with Kufic characters. 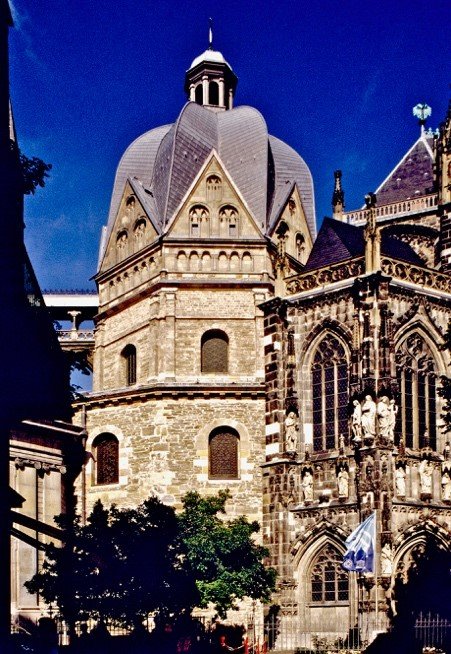 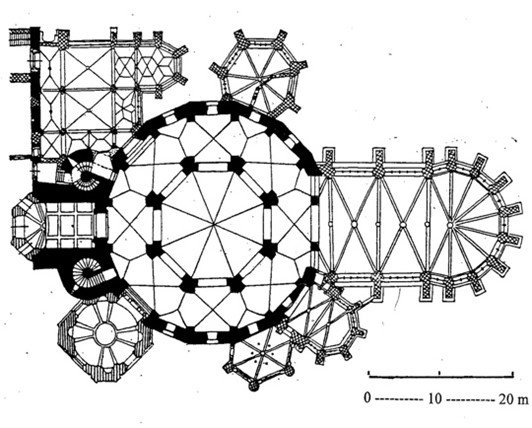 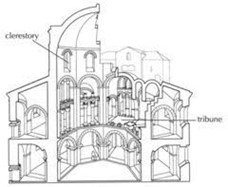 As regards his design for the Castel del Monte, it is worth noting that in 1214 Frederick was elected to be the German king and the following year received the imperial crown in the Chapel of Charlemagne in Aachen, Germany. “His succession to the heritage of Charlemagne and of his grandfather Frederick Barbarossa made an indelible impression on him and remained of enduring importance for him from that time forward,” writes Götze. In the chapel, annular galleries are separated from the octagonal chapel by piers at the corners of the octagon with infill screens composed of columns, railings and arches, a scheme somewhat similar to the more solid facades of the interior court at the Castel. Where the octagonal layout of the chapel in Aachen was modeled on octagonal San Vitale chapel in Ravenna, Italy, it is not too much of a stretch to imagine that the chapel in Aachen was the model for the Castel del Monte. 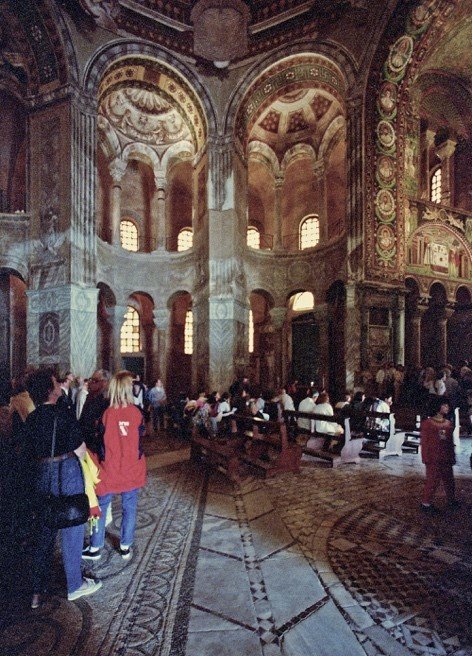 Frederick the Great had frequent contact with Leonardo Fibonacci, “the most eminent European mathematician of his time. One of his most noteworthy accomplishments was to impart the achievements of Arabic mathematics to the Western world. According to author Götze, he used the ‘Fibonacci sequence’ to create “a mathematical expression for the harmonic ratio of the golden section, already known to the Greeks.”

Frederick II built more than 200 buildings including citadels, fortresses and palaces.
In some small way his Castel del Monte represents part of the slow shift from the medieval world to the modern world and to the emergence of diagonality.